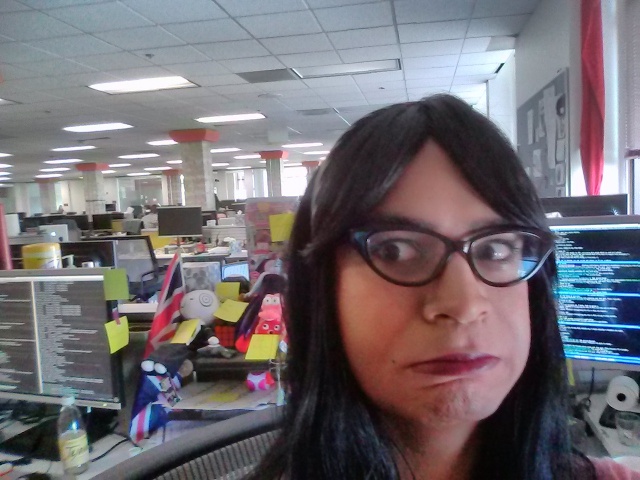 You mentioned going into public and getting respect whether you’re dressed as a woman or man, I was wondering about work and such. Where do you work? So like if you work as a crossdresser then obviously it’s okay at work, but I’m wondering how a different job/co-workers react if one day you come in as a man, and the next as a woman?

So I work as a software developer in SF, which is helpful, since it’s probably the most accepting place in the country! It took a long time for me to start dressing at work. We had costume parties, and I’d usually dress up as a female (to test the waters – this is a common theme with crossdressers, lol). At some point, I just got a bit tired of hiding all the time, so I came out on facebook to everyone. After that I started pushing boundaries a little bit RE work. Wearing some subtle makeup, eyeshadow, ballet flats. Until one day, I just decided to bring it up with my manager. I basically said “You’ve seen the pictures on facebook. Just gonna ask if it’s ok if I start coming into work like that.” His response was basically “I definitely wouldn’t have a problem with it, and if someone does, well, then that’s a problem between them and the company.” :D So yeah, every so often I’ll go in dressed as a woman, and everyone treats me exactly the same. I do have a female name that I use, but not at work, and not with people I’ve known for a while. It would be too confusing to ask everyone at work to refer to me as one name/gender combo one day, and another the next, and I’m perfectly happy for them to call me by my male name whenever :)

Me, hard at work: 7 thoughts on “Ask a Crossdresser: Work”