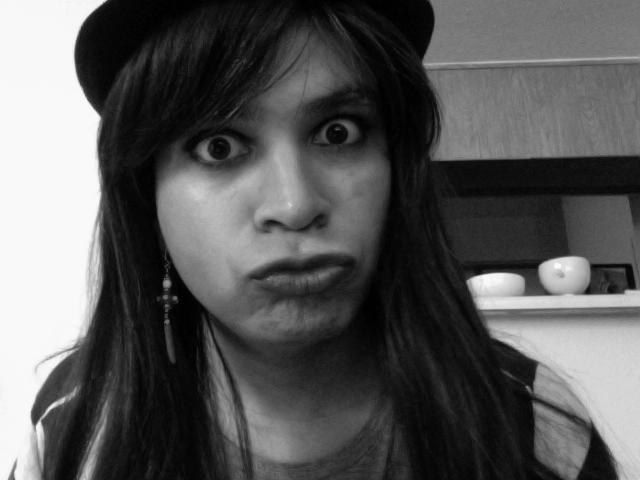 Generally I don’t like going out on weekends if my wife is around, because we don’t really get to see each other too much on account of A: full time job, and B: Commute time, but when the opportunity to go out dressed presents itself, I at least try to take it. On this occasion, I packed up a bag and headed into SF to hang out with a friend of mine.

Got to her place. Got changed. Got made up. Got nervous. Got outta there!

I hadn’t packed a handbag (terrible, terrible mistake) so she lent me one of hers – it was a white leather bag from Coach. I’m pretty sure I desperately need one now to be happy, but I digress. So out we went, and got on a bus towards the Mission. It was daylight. I thought I’d done my makeup pretty well – but people could still tell.

In flats, I’m 5’11 – I was wearing some low-heeled boots – maybe 1 1/2 inches, but that puts me over 6ft – and seeing the tall, broad-shouldered girl(?) walking next to the much shorter, skinnier, and prettier girl, well – I know who’s going to look a bit odd.

Still though. I was out! Walking around! in daylight! LIKE IT’S A NORMAL THING TO DO (which I suppose, technically it is, right?) We hit up a thrift store in the Mission. It was pretty awful – nothing good, but everything was packed so closely together, it was difficult even to pick something off the rack, let alone put it back on! I wandered around, trying to be as brave as possible, which in a place like that, it s bit tricky. Picked out a belt. Paid for it. And away.

Success! I accomplished something else. I BOUGHT SOMETHING IN GIRL MODE! VICTORY! I almost expected a ticker-tape parade. Almost.

Ok, what now? Hungry! It’s still early – let’s walk to the Castro and see what’s up! Time to grab some sushi :D It was a tiny place, they didn’t make a huge fuss over me or anything (because, of course my paranoia expects it to happen all the time). Although, after we paid, they did give my credit card back to me (with my male name on it) and my friend’s back to her. I guess that’s probably ok. I was indignant for half a second, but then bollocks, who cares?

Full of raw fish, it became clear it was time for a drink. Maybe OTHER FRIEND is around! So we walk. My feet hurt. Clearly, these boots are not entirely broken in. I should probably get some insoles or something.

I don’t remember being this drunk when I was sitting down… It’s so easy to forget you’re a lightweight after that first drink. I should probably get a medical emergency bracelet or something that reads “Two drink limit”.

We get into a cab – takes us back to my friend’s place – I grab my stuff, jump back into the cab, and take it to the Bart station. Pay the cabbie. Jump out. Throw up.

The worst has happened. I am HAMMERED. I suddenly remember the last time I got this drink when I insulted my Boss’ mother as a joke, many many years ago. I throw up outside the station.

Stand up straight. Take a deep breath. Seems like it’s all out now – you’ll be fine!

I walk into the station. Get through the barriers. Throw up sneakily behind a pillar. Then onto the tracks.

I get in, and sit down. And dawn breaks in my mind – a sudden realisation comes over me – I’m going to be one of those people. Those people who throw up on trains. One of those people. Oh no. I rest my head on the seat in front of me, put some newspaper on the floor between my legs, and…

I would like to take this moment to remind all you lovely readers that I am, if you recall, dressed up in low-heeled, brown leather boots, black tights, bright blue skirt, a tshirt of some description, a stripy cardigan, and a green jacket.

…and I throw up all over thew newspaper. Some vomit has splashed on my boots. This has not turned out as I had hoped. One of my aims when I go out dressed is partly to evangelise the fact crossdressers are normal people. We do normal things! We do not have sex with packets of crisps, and put the empty foil packets on our head while masturbating to RuPaul. No. We are NORMAL PEOPLE. And I realise, as I start singing “Everybody’s talking at me” by Nillson, pretty loudly on a train, with oesophageal ejecta between my legs, that I have failed almost completely in this regard. Crap.

And then I pass out, and wake up as the doors are opening ONE STOP after my stop. I run out, throw up some more in a bin, take a train one stop back, and call my wife to pick me up. I throw up at my final destination station while they’re cleaning the pavements. My wife picks me up. Takes me home. Puts me on a blanket on the floor and stays up for a few hours making sure I’m alive – We have some conversations which I have zero recollection of. This fact scares me somewhat.

Sorry ladies :( I failed you.

Still though… dressed up and out on the town… not bad :)

One thought on “Out on the town… Sorry, town…”