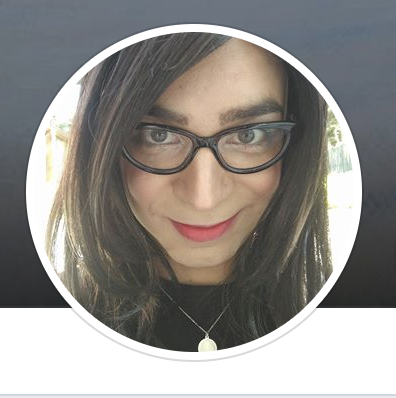 Ever since I started being more open about crossdressing, I’ve had my Facebook profile picture set to that of Liz. Which is of course me, but just a slightly different version of me.

This has caused some confusion, particular with ride-sharing services.

I use ridesharing (i.e., Lyft/Uber) quite a lot. Probably twice a month, and primarily when I need to get home so that I can fulfill the nightly dad routine of either giving my kid a bath, or reading him a bedtime story and putting him down for the night. As per my busy schedule of the last few months (oh god, is it years?), I don’t dress anywhere near as much as I used to, which increases the likelihood that when I do end up getting a ride home, the driver is surprised that my appearance in person does not match the appearance of the profile picture they see on their app.

Most of the time, no one cares. Women drivers have certainly never cared, and in general I’ve had some decent conversations about makeup. Men drivers also generally don’t care. I do secretly enjoy that moment of disappointment when their expectations of picking up an attractive (I hope!) woman are dashed when they see a beardy-man waving at them on the street, and hopping into the backseat to be ferried home. No one has ever given me any issue with it.

Until a couple of weeks ago.

As per some jobby/career-type-stuff, I find myself lately flying back and forth to the other side of the country on a somewhat-frequent basis. This usually involves rides to/from airports and hotels. Again, largely without issue.

Picture the scene: it’s around 4.30am. It’s so quiet, hotel reception is unmanned, and I leave my key-card on the desk with a note saying I had to split. I summon a car and lug my medium-sized suitcase downstairs to deserted car park. There is no-one else around. My car pulls up, and I approach the window to get in – the driver seems confused.

This feels like it goes on for some time. I’m pretty tired, because I woke up at balls-o-clock to get a flight I stupidly booked too early in the morning. The last thing I need right now is to get into a deep discussion on why the person in the photo is me. I pull out my phone and show him my profile picture. He relents, and lets me into the car. And eventually apologises.

I was a bit mad at this whole thing, but that didn’t last long. Because, honestly, I get it. It is difficult for any of us to deal with reality not matching up to our expectations.

And I guess that’s my point: Those expectations need changing, and the only way to do that is by butting heads with them.

Being brave. Being fearlessly different. Being your whole self.

I’ve thought about this a lot lately – partly because I haven’t found the time to dress as much as I’d like, and partly because I feel like I’m a bit of a walking contradiction lately, going through presenting as male with my nails done, earrings in, birkenstocks showing painted toes and occasionally a plethora of toe-rings.

I thought at some point this would be hard, but after some practice and some bravery, now it’s just my life.

Pushing those boundaries, challenging norms. Beating down the path until it becomes well-trod and worn, and eventually easier for others of us to walk down it too. I hope I can make a bit of a difference, and I’m glad for all the people before me who wore it down and allowed me to even know the path was there.

I wonder if that Lyft driver, if confronted with a similar situation again will react differently.

6 thoughts on “An Inconsistent Presentation”