One of the things I mentioned in my Crossdressing Goals post earlier this year was that I thought it would cool and entirely terrifying to fly dressed (I believe “Flying Pretty” is the accepted terminology, but i don’t like it. Seems presumptive! I’m not sure I’d personally add “pretty” to the list of adjectives that could’ve described how I ended up looking that day, but so I’ll leave that decidedly in the eye of the beholder).

Also mentioned in the Crossdressing Goals post was the fact that over the course of the last few years, I’ve been trying to be a semi-serious runner. Particularly with having a kidlet now, I want to stay healthy and in shape, so I try and run once a week…ish. I run Bay to Breakers every year in SF, and maybe another race too. I’d run a half-marathon a couple of years ago, and there was another one coming up. In Vegas.

“Hey, maybe I could dress up and fly to Vegas!” I thought, not really believing I’d do it.

The prospect of flying pretty/dressed is terrifying on a number of fronts: Firstly, you’re dressed up and outside, which is inherently scary in itself. Secondly, there’s a lot of people in airports – officials and otherwise – whom you have to interact with in some capacity. Living/dressing in and around San Francisco has been relatively easy because, well, it’s San Francisco, and few, if any, people give much of a shit. In an airport, people are from everywhere! Who knows what their sensibilities are like and how they might react. Last but not least, the most terrifying thing is that you are in no way in control of the situation. You have to stand in a line and be judged. You must present ID that definitely won’t match your appearance, be scanned by a machine that’s told by a TSA agent their best guess on your gender and have it figure out where your anomalies are, and then you’re stuck in a metal tube flying through the sky with seats that are too small.

I don’t really like flying at the best of times, and adding the extra stress of presenting as female is only going to make it worse.

Praise Almighty Bob that Vegas is only a 90 minute flight from here.

I’d booked my flight/hotel/race 4-5 weeks in advance and did my best at not obsessing about it. I recruited a veritable bevy of friends to come hang out that weekend also, which meant that whatever happened, I at least had a nearby support group.

The day approached, and I was becoming a bit more nervous at the prospect. My wife asked me about how likely it was that I was going to be arrested in the airport. I told her that probably wasn’t going to happen, even if I was a little unsure myself. That was the paranoia talking.

I’d read a blog post by Kimberly Huddle that soothed my nerves a lot. She’d done it a bunch. The TSA are trained for this situation. There’s nothing illegal about what I’m planning to do. I’m not pretending to be a different person. I have friends who have flown-while-trans and it’s gone about as well as any airport experience. Seems like I could do it. 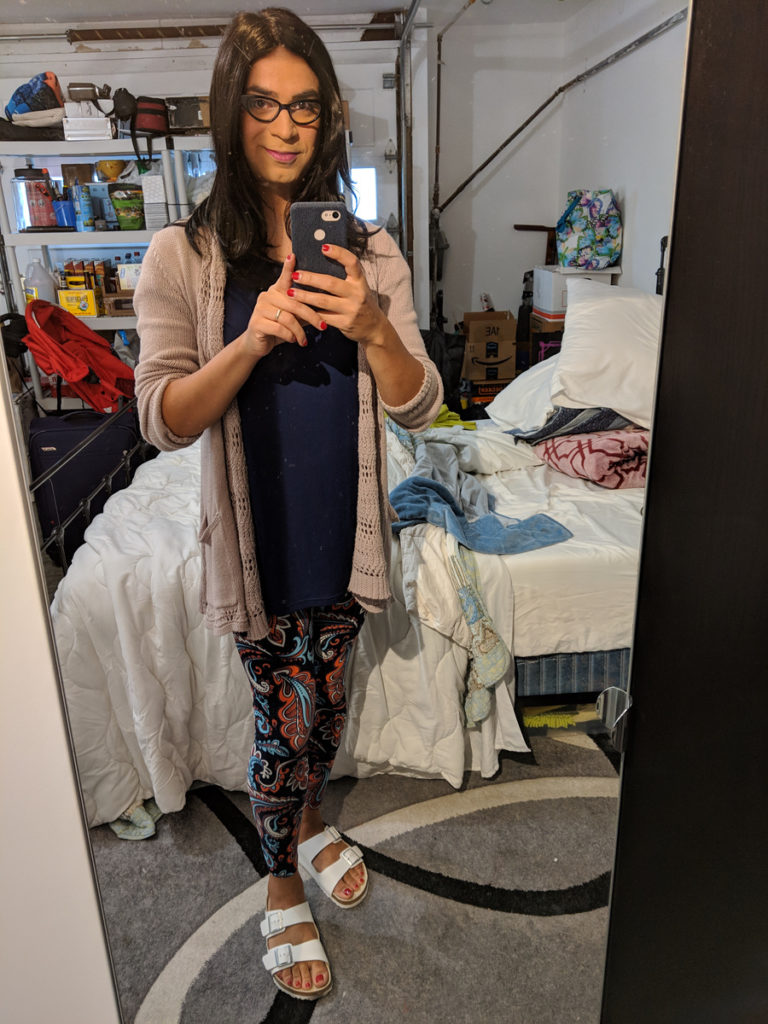 Mumsy outfit? Or comfortable and stylish?

My strategy was to not think too much about it. I picked out a comfortable flying outfit of cardigan/tunic/leggings/birkenstocks. Birkenstocks are my life, now. I got a few pictures from that weekend of me wearing heels, but overall I avoided them, partly because I was saving my feet for the half-marathon, and partly because omg how did I ever not wear Birkenstocks my whole life?! I looked a bit mumsy, but I was ok with that. If I’m flying, trying to eke out any nugget of comfort throughout the experience is my highest priority. 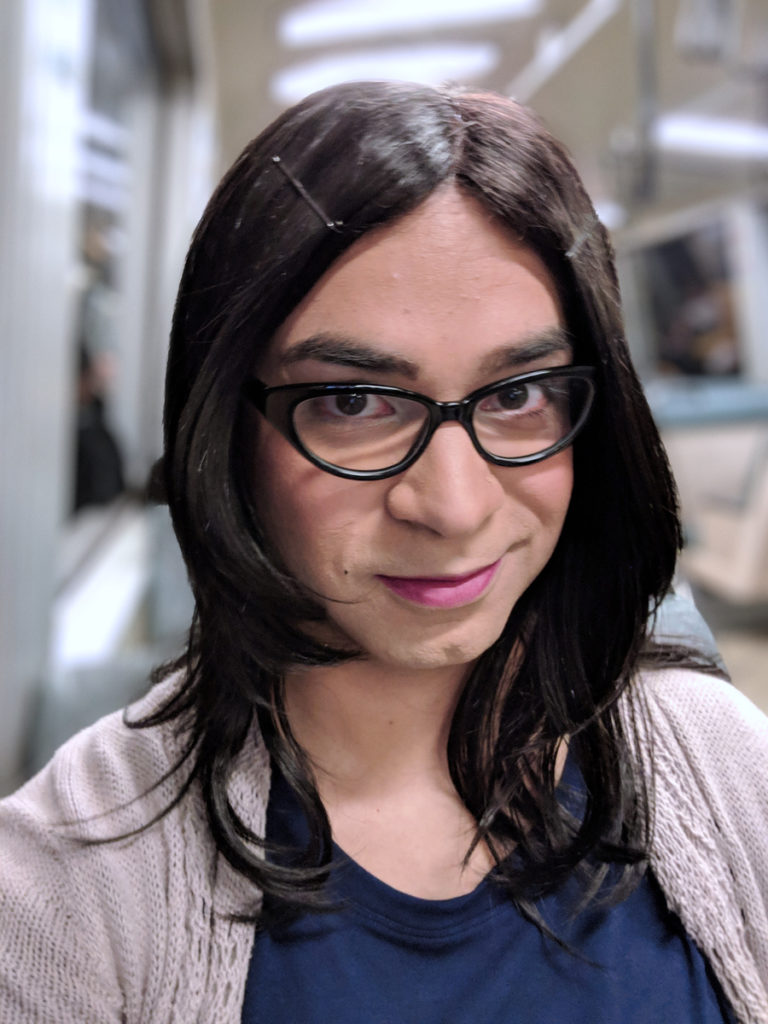 On the train to the airport

Dressed, I lumbered out the front door dragging a heavy suitcase behind me, and off I went. Nerves were building up as I rode the train to the airport. Got the usual looks from random looky-loos on the journey, but that’s nothing new. I feel like I’m immune to it now. Hell, my recent foray into Birkenstocks as my main footwear of choice in male-mode has garnered me a whole new gaggle of looky-loos, and my experience in not-giving-a-shit has paid off substantially. Checking into the flight at the desk was as simple as always, and the person behind the desk Ma’am’d me, which I thought was nice. The terminal didn’t seem particularly busy, which made me happy, until I was confronted with the giant-anaconda that was the security line.

The thing I like about airports is that all of humanity is on show. There’s families, children screaming, teenagers arguing with their parents, people hugging and crying and kissing, and the odd weirdo who just wants to get on with their life with as little hassle as possible (that’s me). Everyone hates the line. People paid me little attention, because everyone’s focused on getting through the line as quickly as possible. As we got closer to the security people, a mother in front of me was stressing out, asking her daughter why she didn’t bring an ID because the TSA needed to check it. I was surprisingly calm, reassuring myself I was doing nothing wrong, that the TSA were adequately trained, and that I’ve dressed up in public before. The line moved on, and it was my time to present ID. So I did. I was expecting a long, hard look, but didn’t really get one. I guess I look like my ID, even if I am wearing a wig! The security dude was pretty friendly. More friendly than I usually get at the TSA checkpoint, but I’ll take it! Cool cool cool, hurdle the first out of the way. Now we’re in line for the scanners.

It’s a point of personal pride that I always feel prepared for the scanners. Cardigan off and over my arm, purse put into my backpack, laptop out and ready to go, shoes off before I even get to the trays. I’m ready. The guy in front of me definitely was not ready – it felt like an age watching him battle with his bag and check his pockets a thousand times. There were no pockets in the leggings I was wearing, so a fairly easy self pat-down. My tray is ready to go through the machine, and so I line up for the scanner. The stressed mother and her teenage daughter are ahead of me. As the daughter steps through, the mother realises that her socks are odd. She turns to me and mentions this, a little weary. I comment on how I used to do that when I was a teenager, and she said she did too. I am surprised that a stranger is talking to me – this is not a thing I particularly like, or am used to, but hey, at least she’s friendly! Her daughter zips through the scanner, and so does she. It is my moment. I suddenly fear sirens and flashing lights.

I step in, raise my arms above my head. The scanner swirls around me. I half turn to my left and step forward and out.

I get a speedy pat-down by the friendliest TSA agent I’ve ever come across. My hands up, she pats my legs down and I twitch as she brushes the back of my knee. She laughs, as do I. She pats down my crotch and I guess realise there’s a penis there. She turns me around and says she needs to do a swab test thing, so I stand waiting for the results and see the screen she was looking at – there’s a big yellow blog over the crotch of the person on the screen who presumably represents myself. As per the wikipedia article linked above, the TSA agents press a button to indicate the gender of the scannee, and anomalies are shown to the agents on a screen. It is likely they tagged me as female, and the scanner said “check that crotch, there’s something there I didn’t expect!”. Seems like a reasonable precaution. The swab test comes back clean, and she cheerfully sends me on my merry way. That’s it. 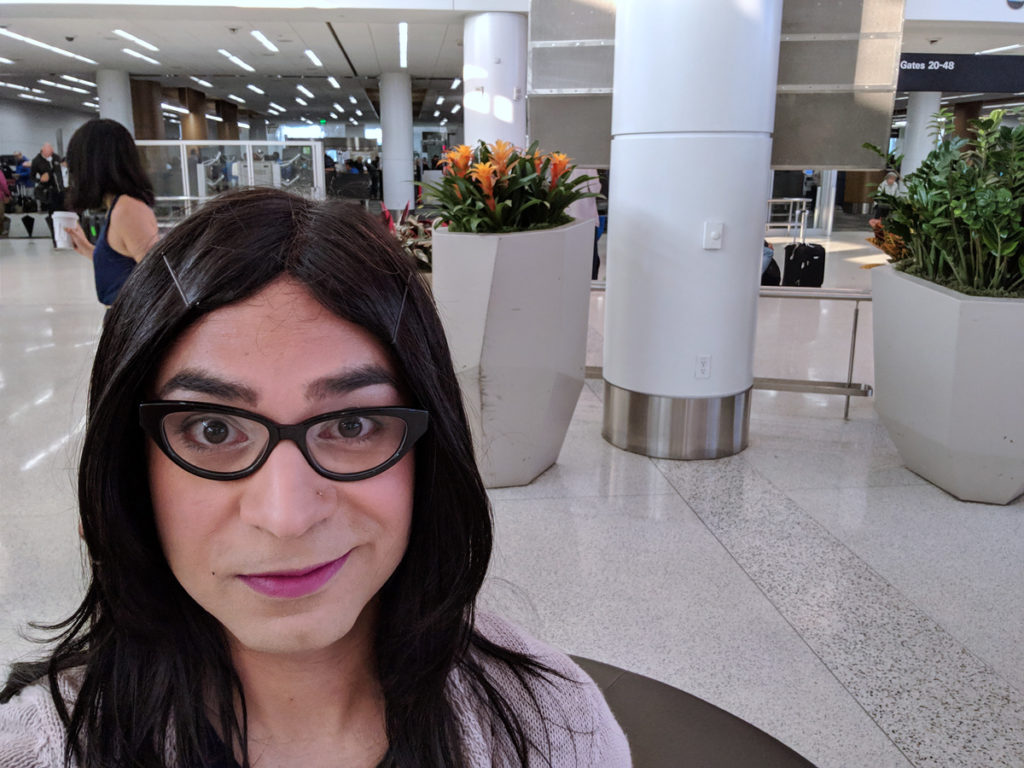 The other side of security

That’s it? This seemed all too easy, but that truly was it. I wandered off to my gate, where I waited a good hour because my plane was delayed. Another lady struck up a conversation with me (I must have a friendly face or something) where I think I bemused her deeply. She asked my name and I gave her my male name, because, fuck it, that’s my name. She made a confused face, like she was trying to process that data alongside my appearance. She talked about her kids and struggle to get jeans. I mentioned my son and my wife, and she made that “PROCESSING” face again, and then struck up a conversation with a woman on her opposite side. I guess maybe I overloaded her brain, but that’s fine – I didn’t want to talk anyway! 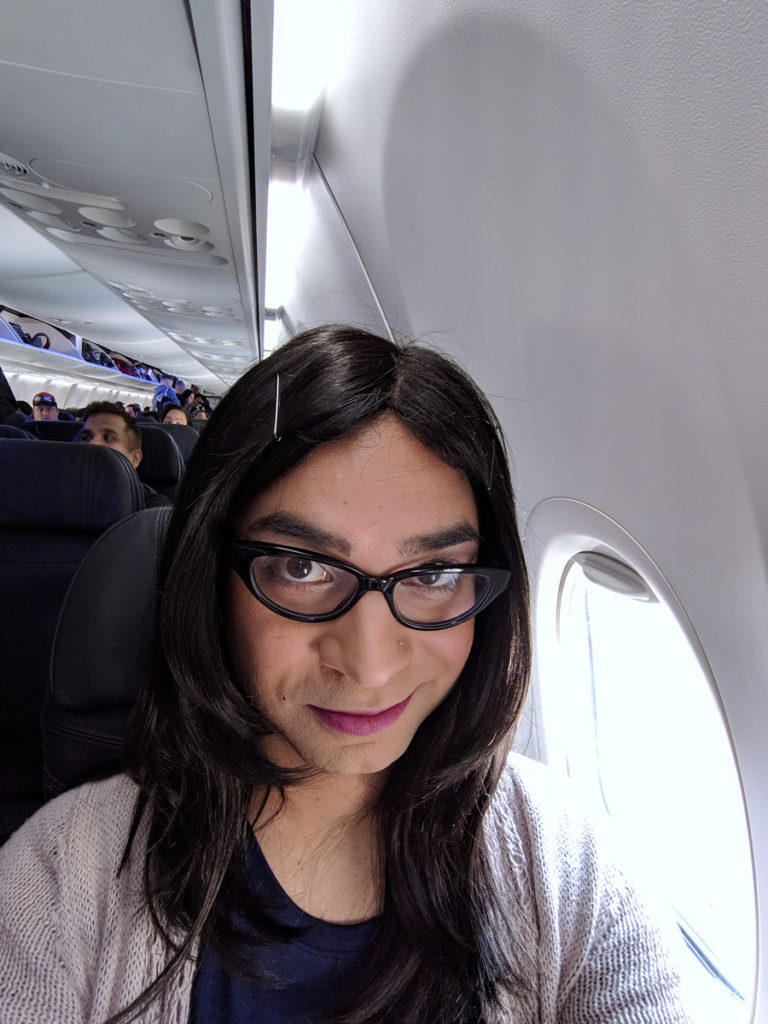 Vegas was fun :) I spent two consecutive days dressed, which isn’t a thing I usually do. Partially I managed it due to being a bit pragmatic, i.e., not shaving what didn’t need shaving. Also copious moisturiser to keep my razor burn at bay. Two consecutive days dressed is tiring. My head hurt from the wig on my head, my back hurt from the breastforms and bra. But I felt like I looked pretty good. Wait staff were ma’aming me too, which was nice. My Lyft driver from the airport was calling me honey and giiiirrrllll and telling me about hot dudes – not really my thing, I think she assumed I was gay, but whatever, she was overtly nice and friendly and got a fat tip for it. Oh, and I did pretty good at the half-marathon, considering I did not train enough for it!

I’m almost disappointed that this whole event wasn’t more dramatic. Everything went so much more smoothly than all my other airport experiences, which I find deeply suspicious. But I suppose a part of it is that when presenting as female, I’m not part of the herd anymore – I’m a special situation that needs more delicate treatment, and I’ll be honest, I can’t be mad at that.

I had some time for a mini photoshoot here and there, and I got a good few pics out and about :) 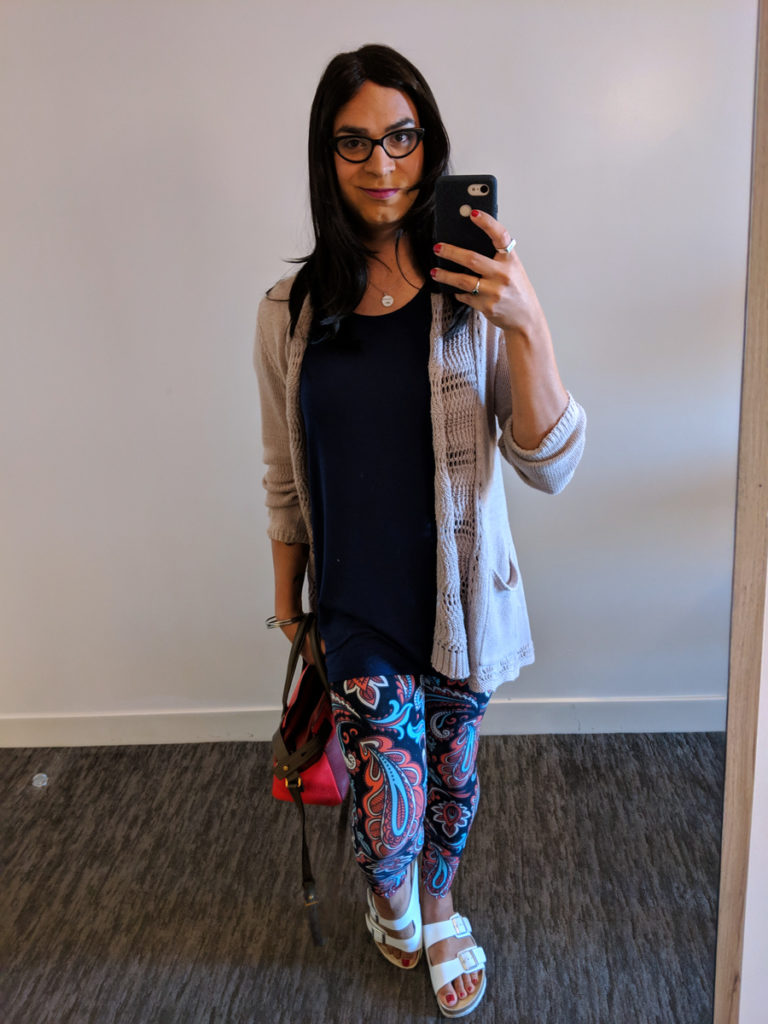 Back at the hotel 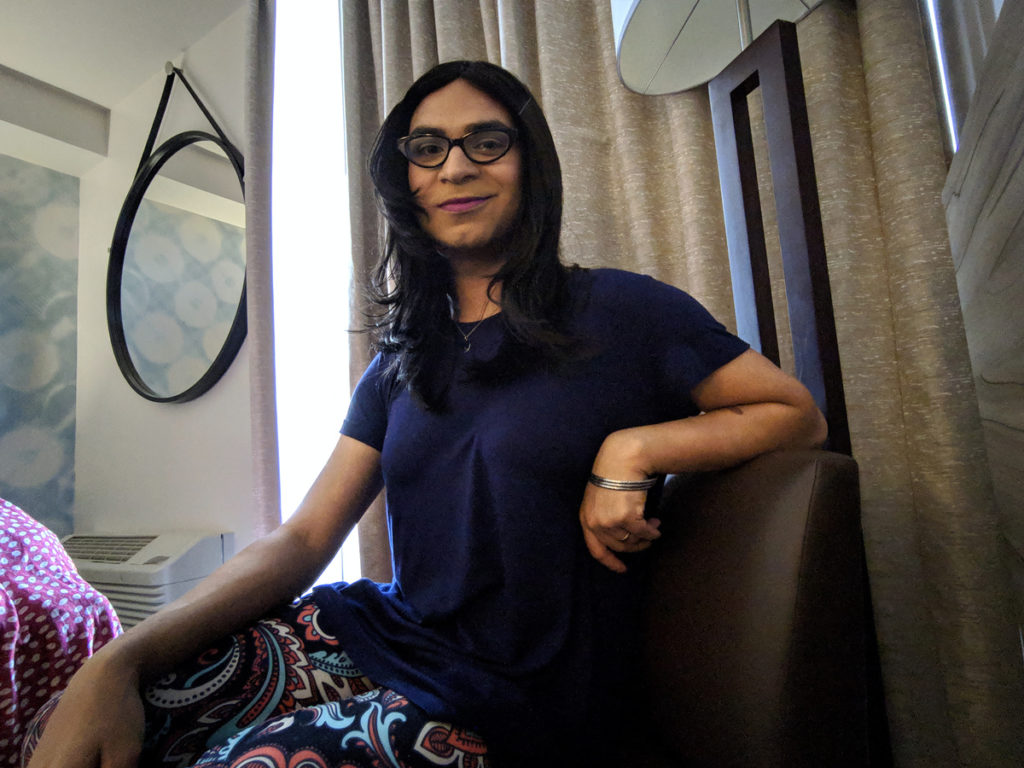 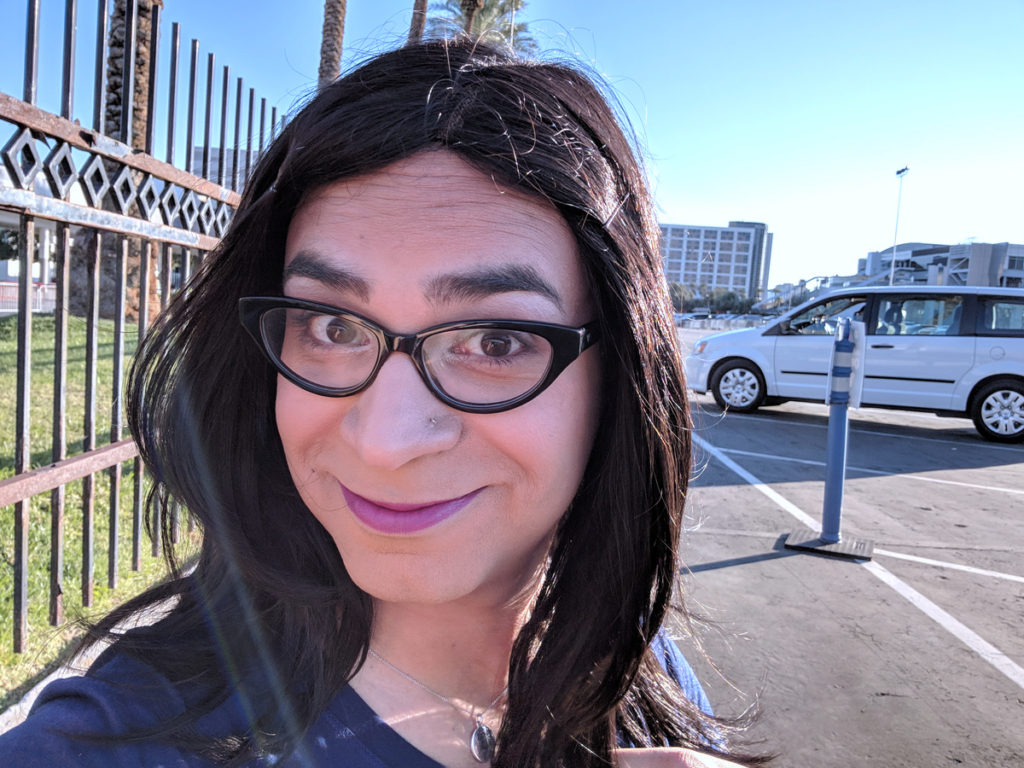 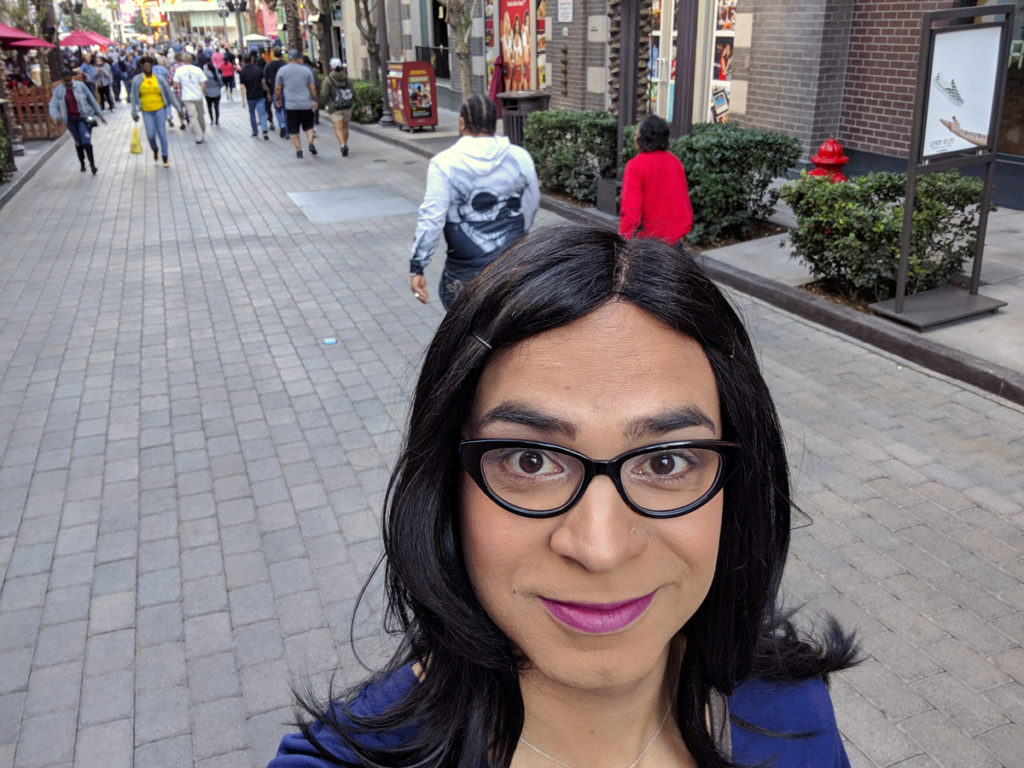 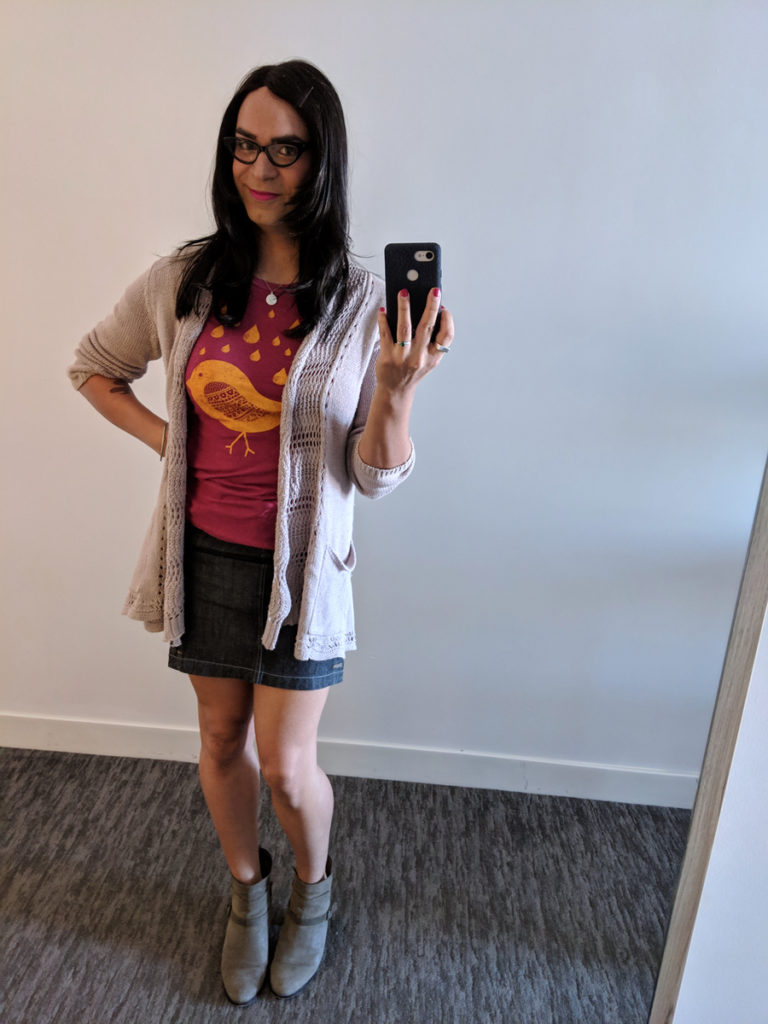 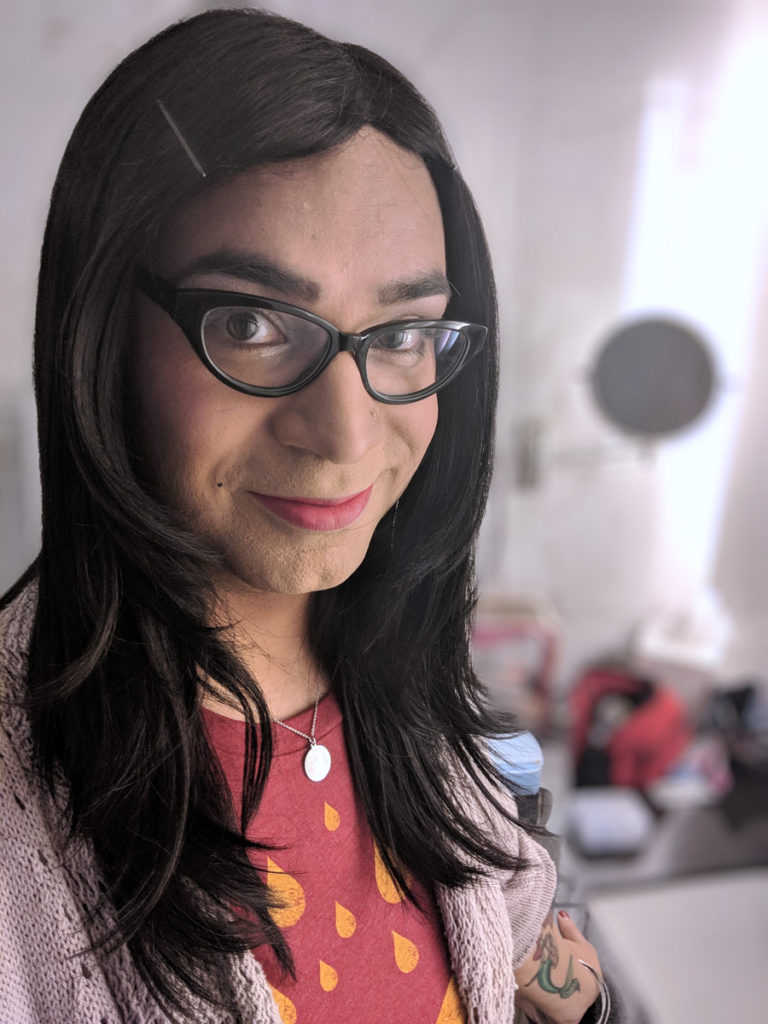 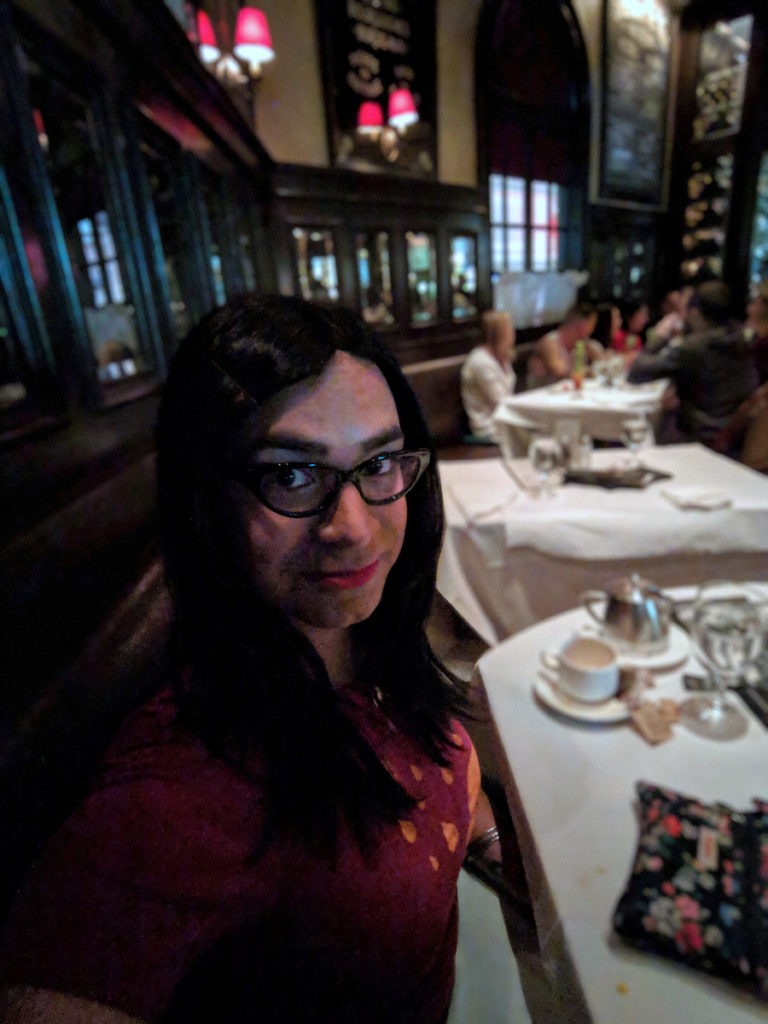 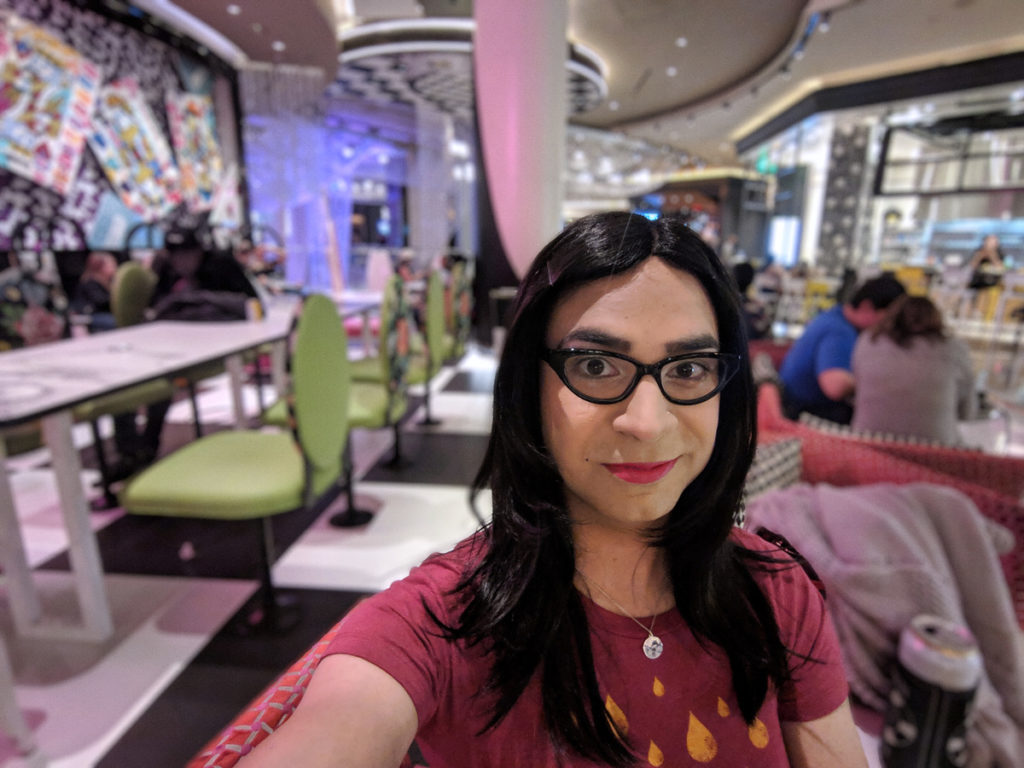 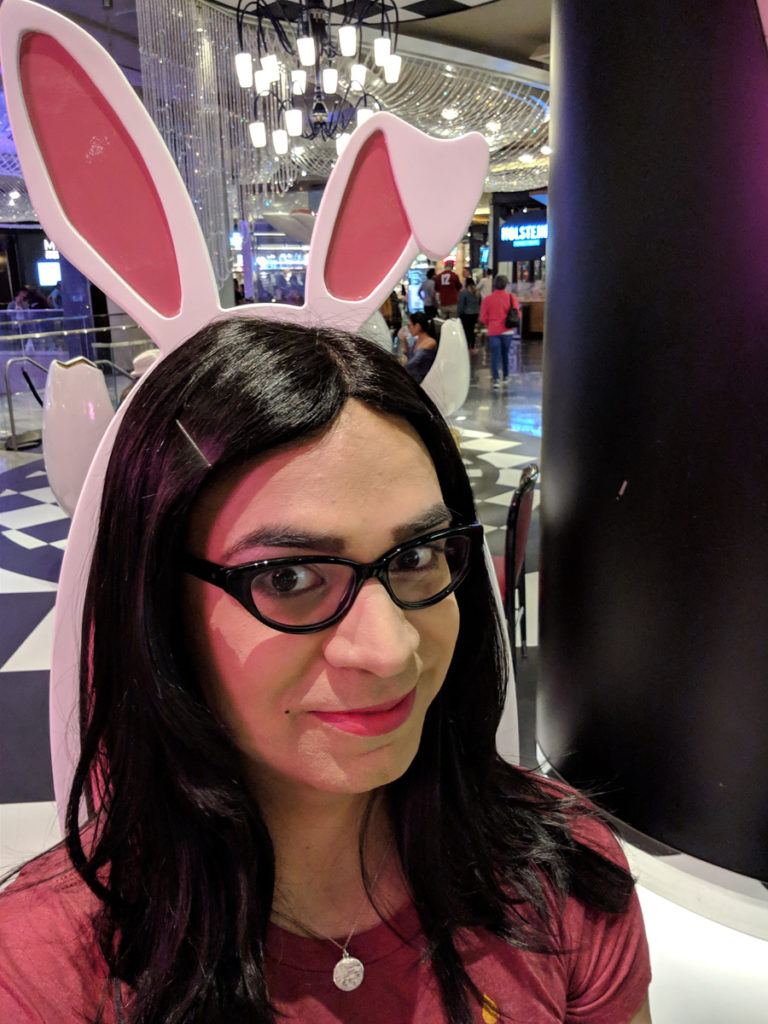 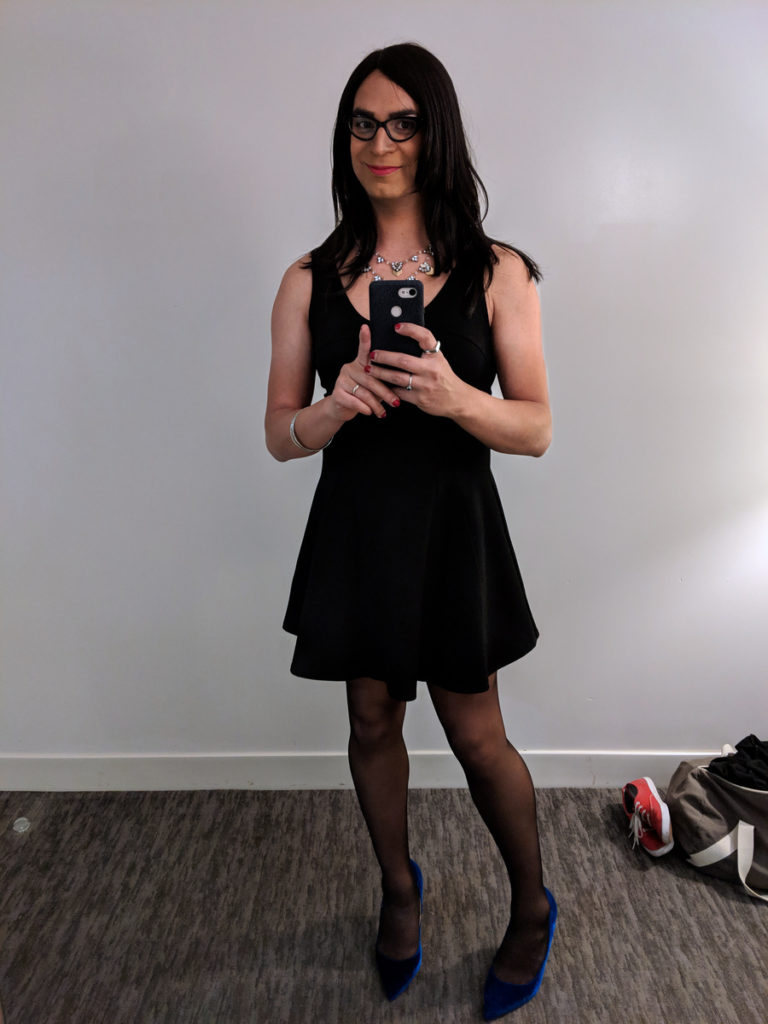 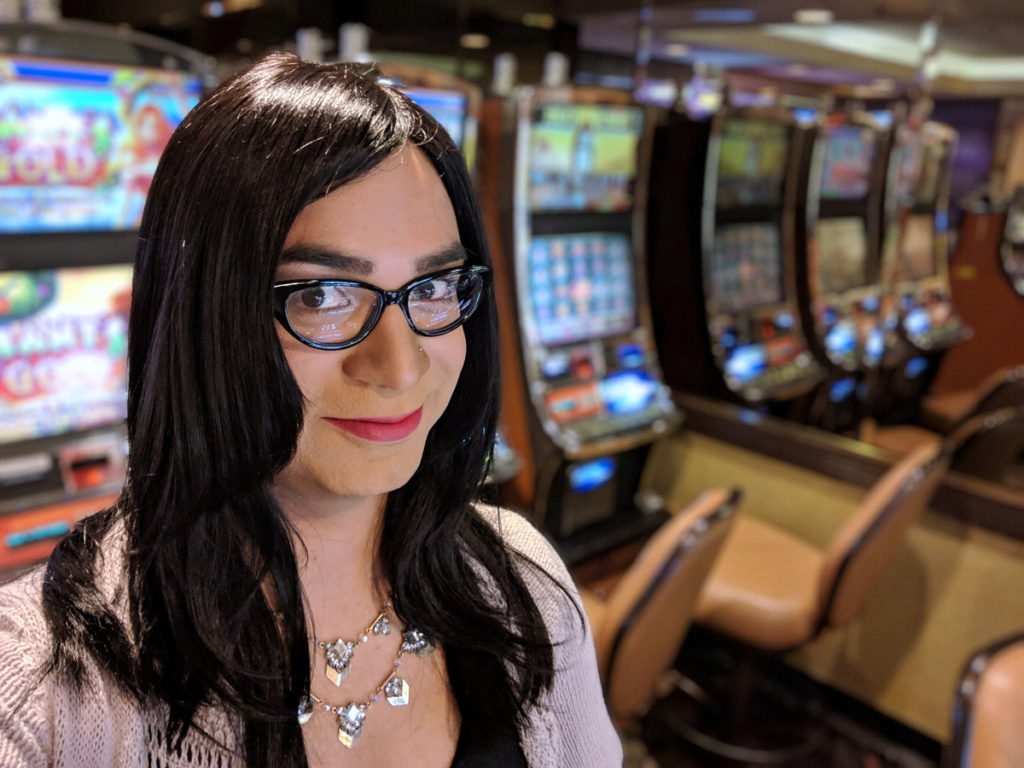 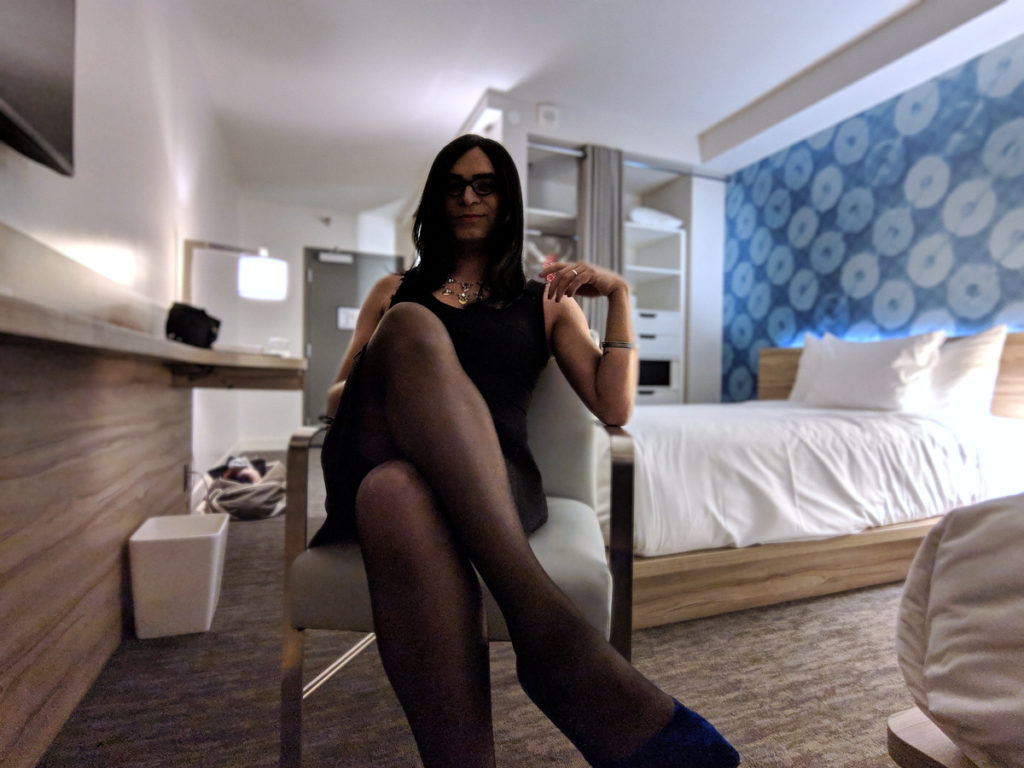 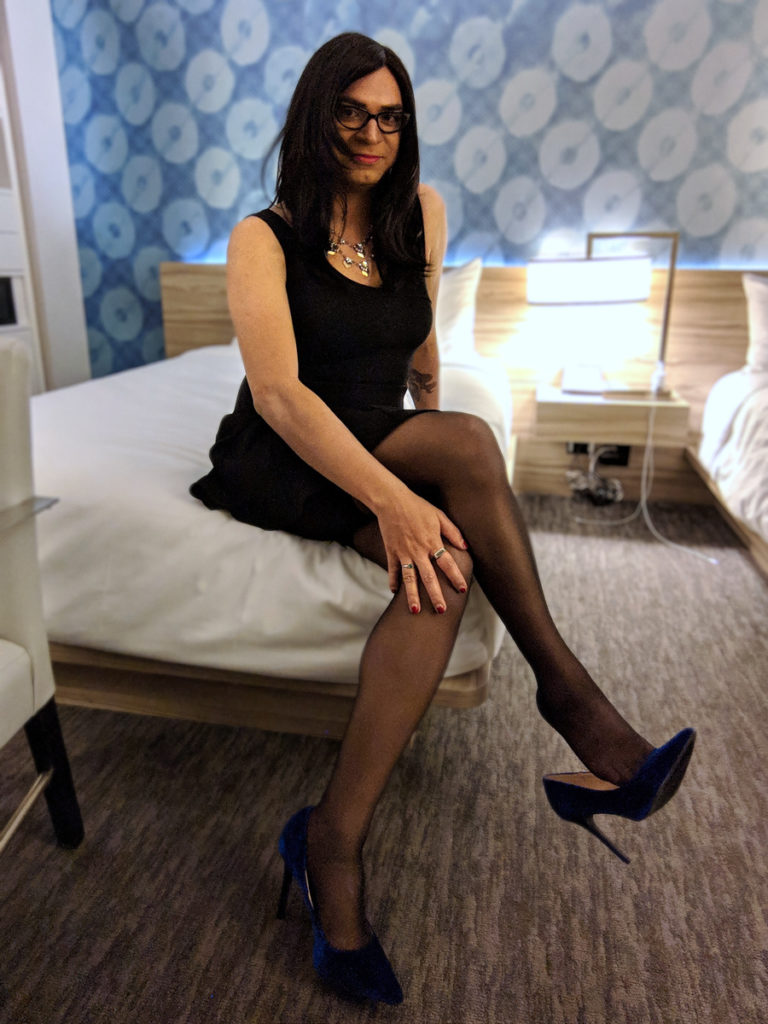 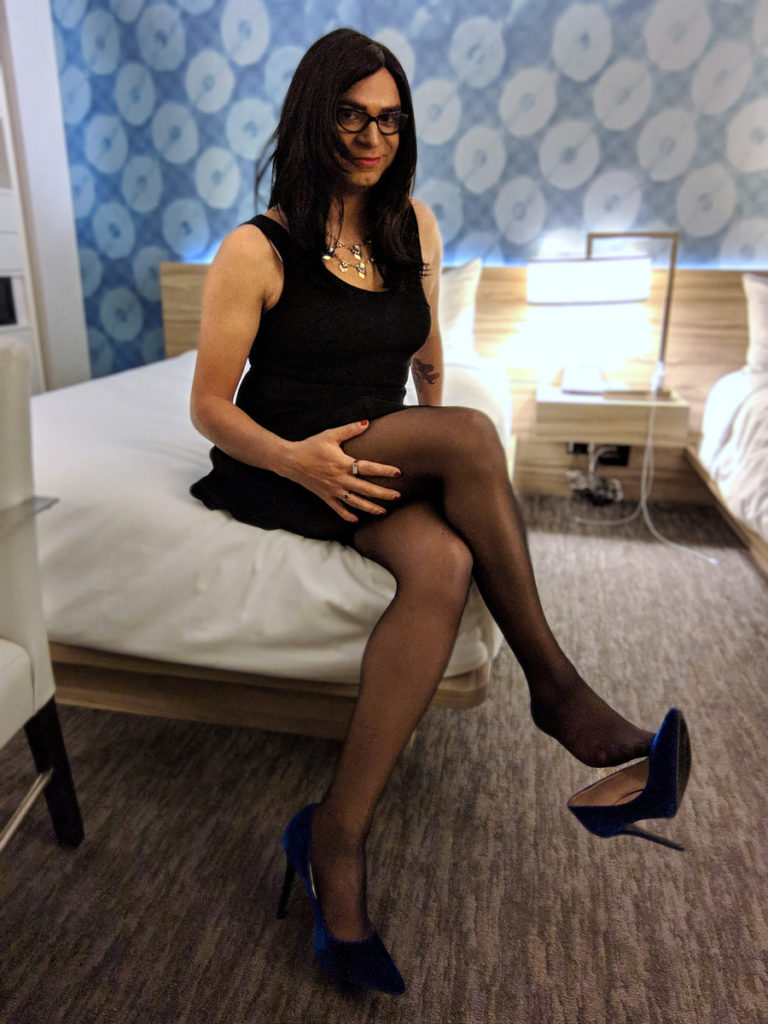 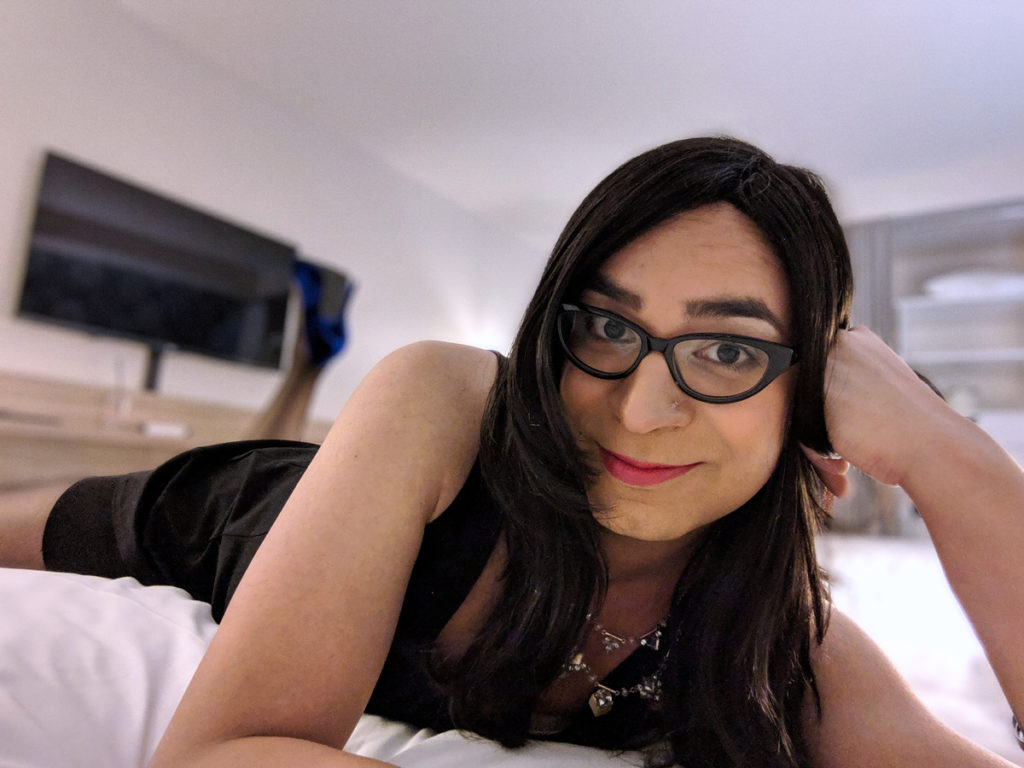 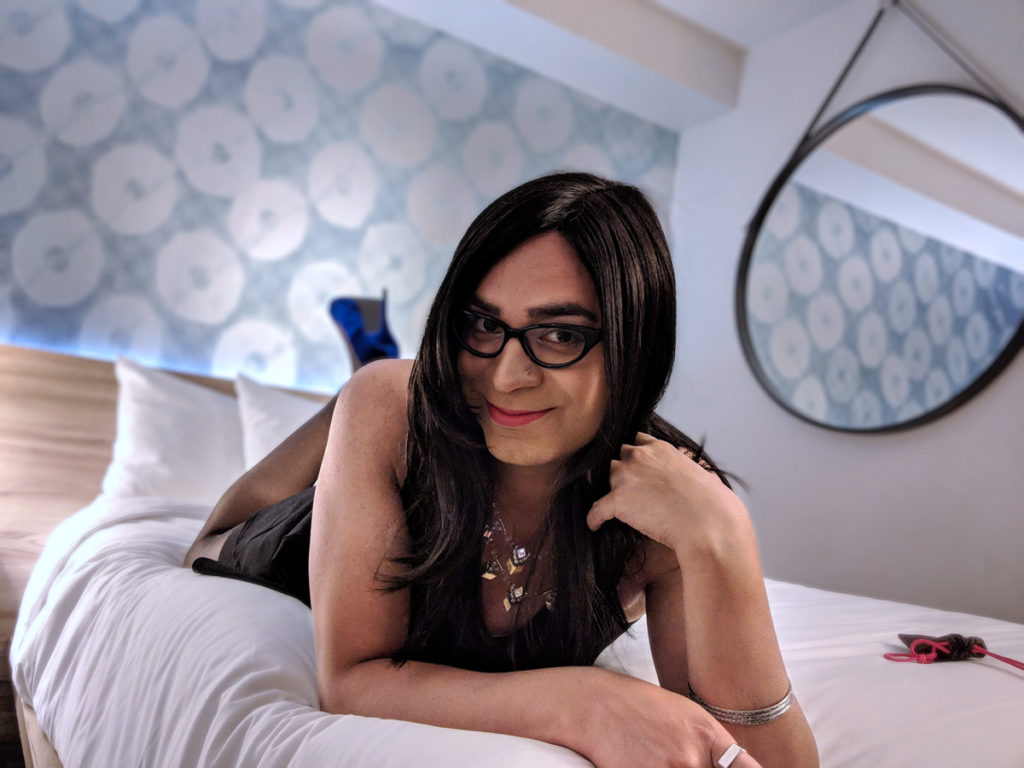 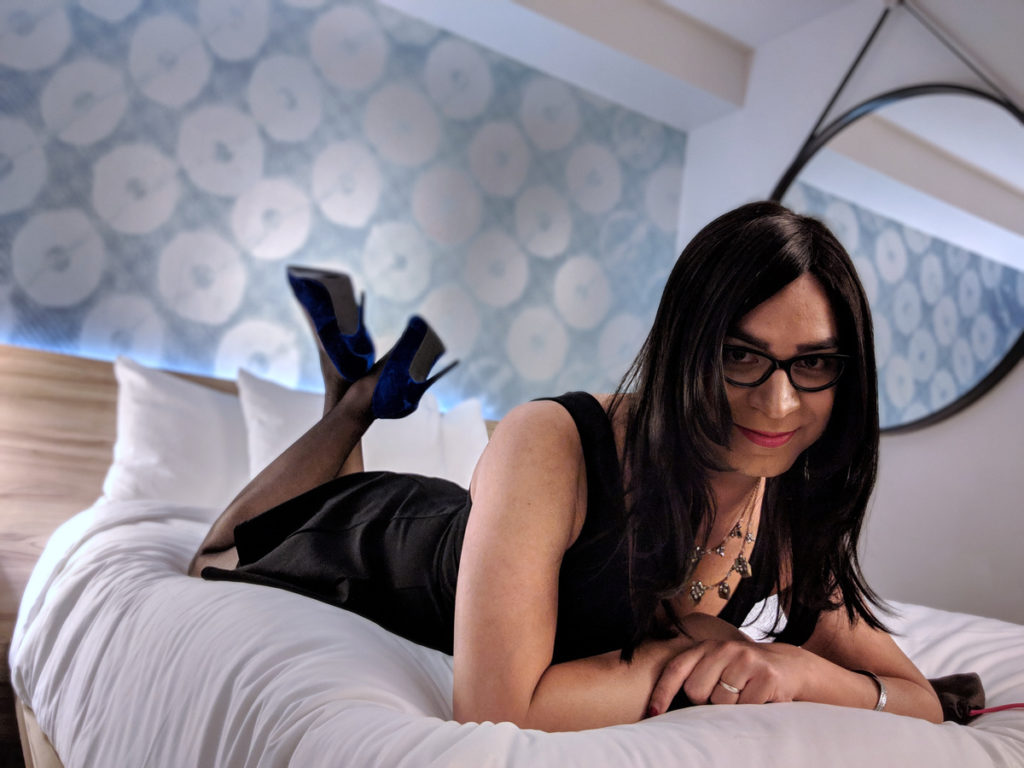 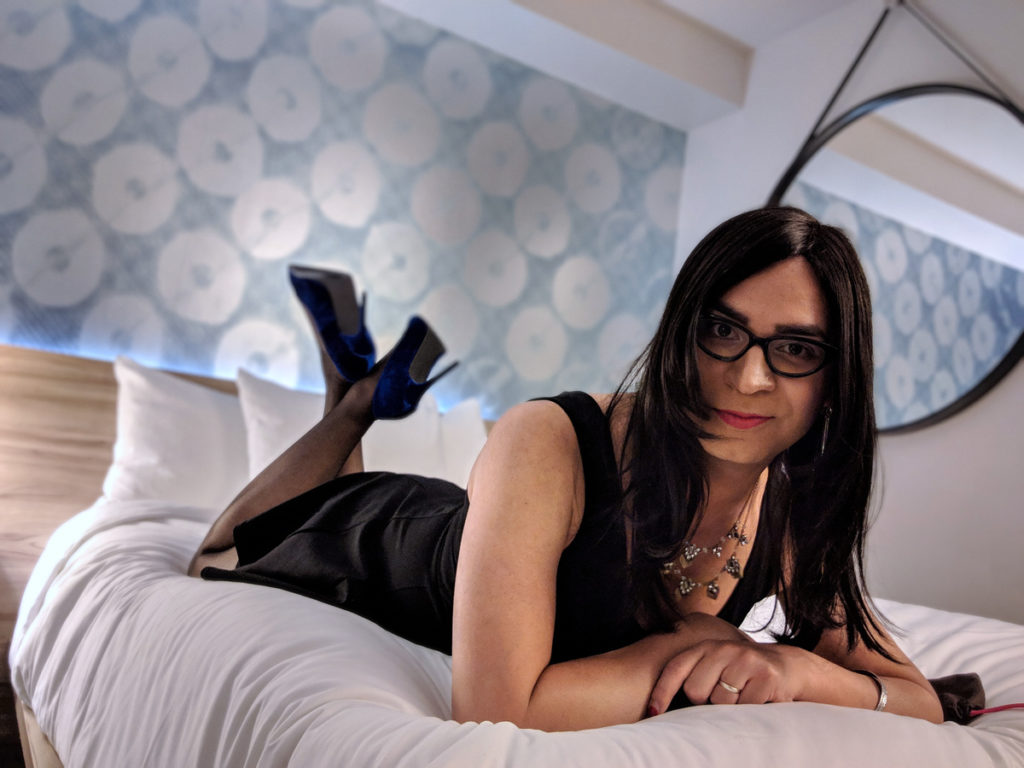 All in all, a good trip. I should probably do Vegas again sometime :)

14 thoughts on “Flying Pretty (and a Las Vegas Adventure)”