Home » Being Out » Crossdressing As A Parent: ~15 months in

Our son was born a little over a year ago now. He’s pretty awesome :D Overall, he’s been a fairly easy baby, which is great for me as a new parent, though he’s being a minor terror lately! He’s strong-willed, determined, and has clear opinions on what he wants. I like that. I hope we can raise him to be thoughtful and considerate. 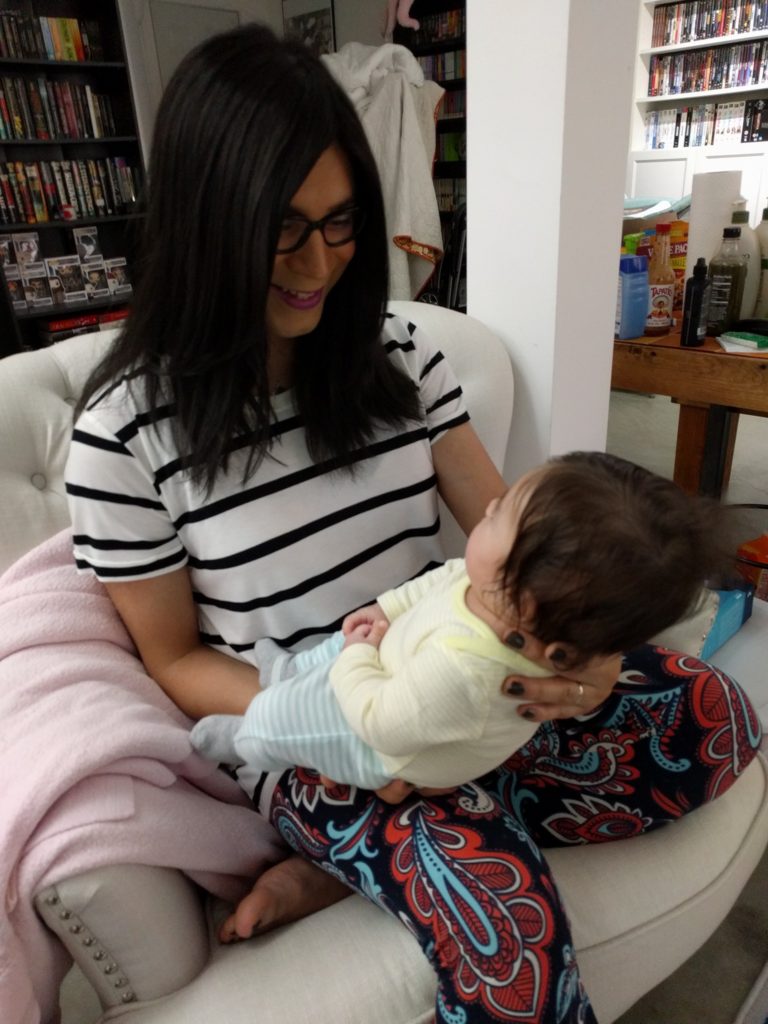 A picture from when he was only a few months old

I want to be a good parent. I said before that when we’d have children, I’d try to be honest and up-front about my crossdressing. This remains the plan. Children are like sponges, and they’ll soak up your feelings. If you’re open and honest as a parent, they’ll be open and honest too. If you’re secretive and feel shameful about things, they’ll pick up on that and be secretive and be shameful as well. (Ok, these aren’t strictly facts, but come straight from an imaginary book titled “Liz’s Theory On Child-Rearing”. Seems like it makes sense, though). My dad was always pretty closed off, and that ended up being the general tone of our relationship. I don’t want that for my son.

My plan is to be open, be honest, not hide anything, and keep dressing. If he has questions, I’ll answer them.
If I want him to be open and honest with me, I have to lead by example. Hiding is a short-term solution – it might avoid an immediate problem, but causes longer-term issues, particularly when you’re accidentally found out. On top of that, there’s also the mental drain it will have on you for years trying to keep it a secret. Keeping a chunk of your personality hidden in the shadows is hard – I’ve done it before, and I never want to go back. If I have to have a conversation with my son when he’s 15 about how I’ve been keeping a secret from him his entire life, I have failed.

So far it’s been going ok :) It’s easy right now because he’s so young. He’s vaguely starting to form words, and is still growing his mental model of the world. For a little while, he took any change in my appearance badly. The first time I shaved, he screamed at my unbearded-visage. For a little while after that, whenever I had to shave, I had my wife hold him such that he could watch me take the hair off and understand that I was the same person, but beardless. That worked pretty well :D

With respect to dressing, he’s seen me dressed. The first few times, I think he thought I was a completely different person, and was a bit reticent. One time I assumed he knew it was me, because he laughed :D Another time I dressed around him, he was wary again.

I try not to take it personally – I know it’s purely because his brain is still developing, and that humans aren’t designed to cope with people who make drastic changes to their appearance. Babies certainly aren’t. I am hopeful for the day I get home from work on a day where I’d been dressing up, and he recognises me and is happy to see me like he usually is when I get home. (“Happy” might be an understatement, given that now when I get home after work, he tends to run around excitedly screaming :D)

One time while I was getting ready I tried to show him the intermediate steps: I had him see me with a cleanly-shaven face, then dressed with the boobs underneath, then a few times throughout the make-up process, and then finally with the wig and glasses on. Mostly he was just fascinated and curious. Not scared or disgusted, as was my fear, but why would he be? That’s something that’s learned, not innate. It will take some time, but he’ll understand.

I mentioned this in passing in the aforementioned post, but I’ll tell it again: When I was at uni approximately, oh, a thousand years ago, I was just starting to accept this feminine part of myself. I was still struggling with it, but I’d started to come to terms with it, and had a little student loan that I used to buy some clothes/shoes with (and I think one stick of black lipstick, and some black eyeliner pencils – it was a gothy time). I was also starting to open up to people about it a little. I remember being in the computer lab one day, with no one behind me, and I was looking at shoes, I think. A friend of mine was in the lab too, so I struck up a conversation with her over chat and hesitantly showed her the shoes. She was cool with it, essentially, but also a bit guarded. It turned out that her dad was a crossdresser also. We didn’t dig super deep into it, but I got the sense that she resented him for it. That it had made her life difficult and awkward. That their relationship wasn’t the best.

I don’t want to alienate him. At some point he’ll be a teenager. Being a teenager sucks. Everything is the worst, and the world is out to get you, and you hate your parents. Being a teenager sucks more when you have concrete things to point at and say “This is the reason why I’m unhappy!”. I worry that I am going to be that reason.

Well, I suppose no matter what, I’m going to be at least one of those reasons. Teenagers and their relationships with their parents are fraught enough at the best of times. I worry that I’m going to make his life harder: That he’ll be made fun of at school, that he’ll take a lot of flak for a choice that he has no part of.

I worry that people will judge me for “inflicting” my lifestyle on him.
I worry that he’ll take after me.

Most of all right now, I worry that I’m being selfish. A rudimentary analysis of the situation reads as if I’m consciously making a trade-off between my happiness and his. I suppose I am, but it’s a calculated trade-off. As I get older, I’m realising more and more that perfect solutions are few and far between, and that in general you’re trying to find the least objectionable solution from the selection of choices available to you. Like trying to find the cleanest stall in a public bathroom: unless your timing is impeccable and you happen to chance along the place two seconds after the world’s most diligent bathroom attendant has scrubbed the place clean, the best you can hope for is that the least shit-covered stall is available for use.

As far as I can tell, there’s no way for this to not colour his life poorly, if only a little bit.

Option A: Hide, and have him lead as normal a life as possible

If I attempt to hide this side of myself from him, that means I’m back to square one. I’ll be miserable, depressed, full of guilt. Carrying a weight forever. Resentful towards him for my unhappiness, but he’d never know why. Our relationship could never be all that it could be. Not to mention that he’ll feel my misery and carry it with him. I don’t want that.

Option B: Be open, and and honest, and have him deal with it.

If I attempt to be open, his life will probably be hard. He’ll have to fight, and any time he gets hurt, he’ll blame me. I can teach him that people are different, and it’s our duty to respect their being, their lives, and their choices. But when the rubber hits the road, his teenage years, unless society changes a LOT in the coming years, are going to be tough.

I think Option B is the right one. Keeping things from him will only make us both feel bad in ways he won’t understand. And in the likely event he’d find out later anyway, he’d feel like I was lying to him his whole life, which would be accurate.

It’s easier to navigate in the light than it is in the dark.

I am optimistic though. I have an opportunity here to raise my son the right way – raise him to be tolerant and understanding of others. To build our relationship on a thousand awesome things, and not have this one thing be the iceberg that sinks us.

I hear parenting is hard.

12 thoughts on “Crossdressing As A Parent: ~15 months in”