Home » Being Out » Dressing again after a long hiatus

Many years ago, I made a promise to my wife that if and when she became pregnant, as a show of solidarity, I would sport a beard the whole time for her benefit, as a lover of a good beard. Then, at long last, sometime last year she got pregnant.

Actually, that’s probably not fair. My dressing up had slowed to a crawl before that, and I hadn’t really dressed at work for many, many months. I suppose that I was already on a down-swing, and the bearded-ness, and general mental-fuzziness from there being too many stress-inducing things all happening at once, didn’t help. It was during that long bearded period that some of the desire to dress came back, but being obligated to grow facial hair, I couldn’t dress up. I can’t really hold my wife to blame, as she had essentially released me of the furry-faced-contract later on, but I’m stubborn and had to see it through. Some people are perfectly happy to dress up while having a beard. Not me. Doesn’t work. Whatever items there are that exist on the mysterious checklist of crossdressing-satisfaction, at least a few of them aren’t able to be crossed-off satisfactorily enough for me to be happy. 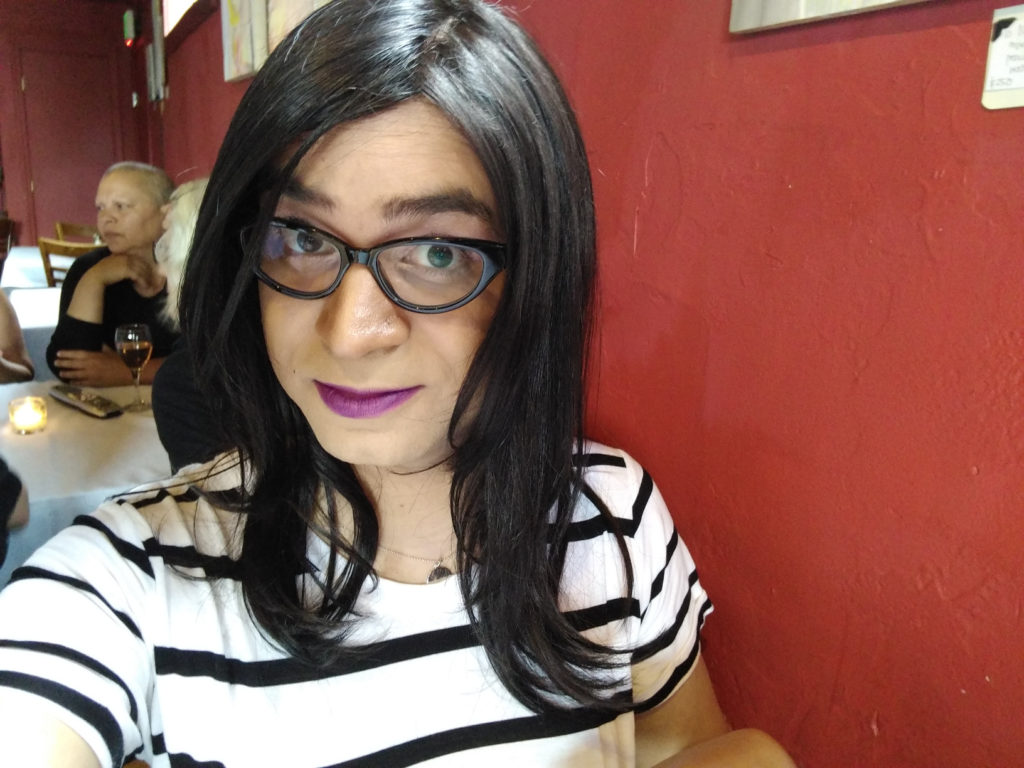 Finally then, the baby did the ol’ tunnel-shuffle and exited bumpily into the world, whereupon the period which might be dubbed chapter three of “The Long Winter: Definitely Not a Crossdressing Story”, began. Chapter one would almost certainly be titled “Life is complex, are you sure you can handle it?”, sure to be followed by “Chapter 2 – Beards, the enemy without”. I shaved the beard off on what I believe was the second day back from the hospital – the first day being fully reserved for sleep. But now it wasn’t a beard that was holding me back, but stress, sleep-deprivation, and lack of opportunity.

(At some point soon, where I have something more interesting to say about the intersection of parenting and crossdressing, I will write things down for people to read. Until then, you can just assume I’m desperately trying to figure it out.)

Reasons for the hiatus aside, not dressing up became… an itch. A deep, burning itch that could only be soothed by the cool balm of Mac’s Studio Fix Foundation in NC40. My wife had taken the kidlet to visit her dad for a weekend, which gave me some blissful hours to myself to attempt to dress up and take some pics.

Did I say blissful? I meant horrible.

I showered, I shaved, and I went downstairs and was confused. For the first time in what felt like forever, I had the opportunity to do the thing I had been waiting for, but the only thing I felt as I sat at my vanity was terror. I don’t exaggerate when I say that as I lined up all the different products and brushes that I was about to use on my face, a stressful task in and of itself given how out of practice I was, I was literally shaking. It seems silly to say now, but I was truly panicking. Frustrated that it had been so long, worrying that I wouldn’t know what to do anymore. I took some deep breaths, and off I went.

I got a lot of good pictures that day, selfies though they may be (another stressful point was that my previous camera set-up was, proverbially, dead in the water). I had definitely screwed up my makeup a bit, but overall you couldn’t really see the little things that I had forgotten to do, or had forgotten to do correctly. But trove of pictures aside, I still wasn’t one-hundred-percent happy. I had dressed up at home, but that’s only so fulfilling. 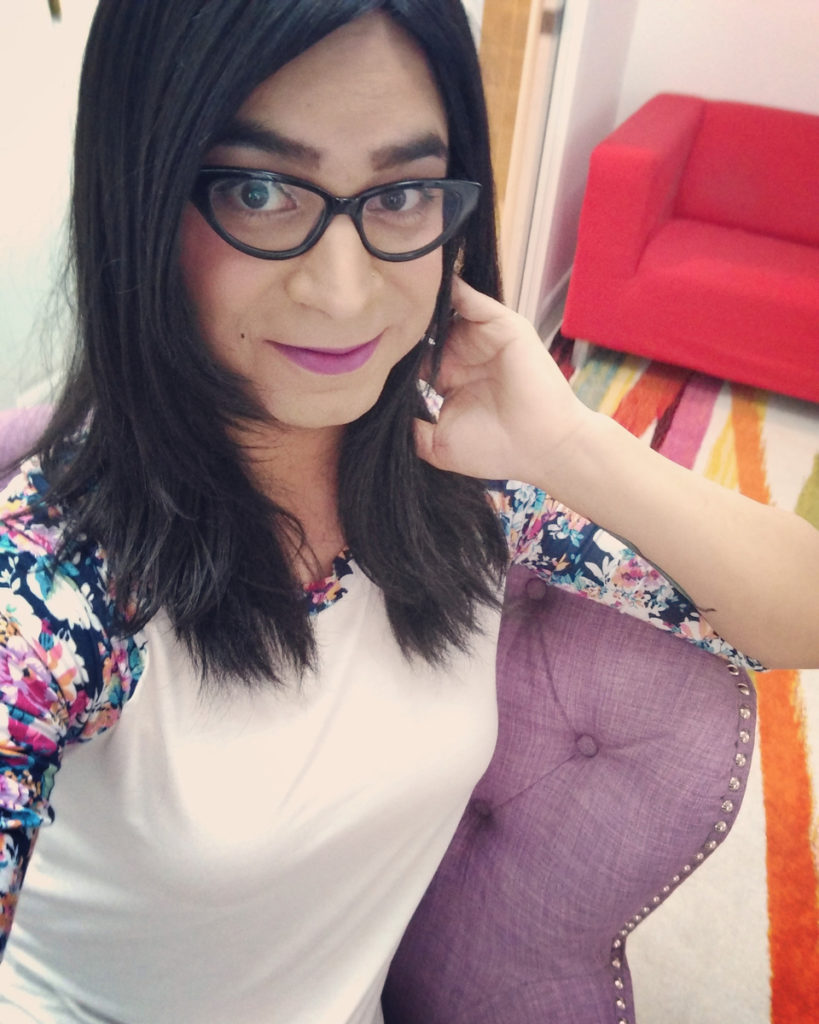 A few weeks later, I and a super-supportive friend of mine planned to have a dinner date. I was going to go dressed. The lead-up to this was absolutely more stressful than breaking the cycle of not-dressing. I had resolved that I looked at least half-decent, and that my makeup skills were still at an acceptable level, but this was different. This involved going outside. It seems silly, right? I, who have gone out and about dressed up to all kinds of places, including WORK, had found myself, after an overly-long dry-spell, absolutely terrified of stepping out the front door (ok fine, the side door, which is far less visible to the street). It felt exactly like stepping out for the first time again, except for the fact that I’d done this many, many times before. I nervously paced, I was sweating. I was angry at the sun – stupid day-star, why are you still out at 7pm!? SURELY IT IS PAST YOUR BEDTIME! Let me have the cover of darkness with which to conceal my doings!

Taking some deep-breaths, I took the hardest step – a literal footstep over the threshold of my domicile – and headed out into the absurdly well-lit evening. I deliberately sat at the station taking selfies and not boarding empty trains until I realised that I had misjudged the time, and unless I got the very next train, I was going to be late. Of course, fate would determine it be packed full of people. I boarded and stepped around some German tourists and their luggage, my fascinatingly-not-too-juvenile Little Mermaid dress twirling slightly as I pivoted around their suitcases and plopped into an empty seat, my face burning and steaming up the plastic lenses of my glasses. The journey was short, and I soon had to alight and spill myself out into the still-bright streets of the Mission district of San Francisco. As tolerant and accepting as San Francisco is, The Mission isn’t what I would call the friendliest place for a gender-non-conforming individual who happens to stand over six feet tall in heels, in a bright turquoise dress that hits above the knee. There were looks and at least one comment which I couldn’t hear, but I soldiered on, head held high (which I think is a mechanical necessity when wearing heels).

The night was blissfully uneventful. We had dinner, we had drinks. I went home. I took my makeup off. I felt accomplished.

And yet… I wasn’t back into a routine yet. Realistically, as I write this, I’m still not. I managed to muster up the courage to go to work dressed just last week, and it was nothing short of a success. I talked through some technical issues to a room of ~30 people who by-and-large hadn’t seen me dressed before (I started on a new team not so long ago) and endured only a few awkward moments during the rest of the day whereupon a small number people felt what I suppose was some desperate internal need to address what I was wearing. A success, nonetheless. Stepping out the front door was easier than the previous time, and I’m sure the next time will be even easier, and the time after that, and the time after that. The biggest victory of that day, though, was the fact that for maybe the first time ever, myself being fairly insecure about how I look, I was able to feel, if you’ll excuse my language for a moment, fucking gorgeous. It was as if everything had come together. The outfit, the makeup (ok it was still a bit shoddy, but workable :D), and the bravery. 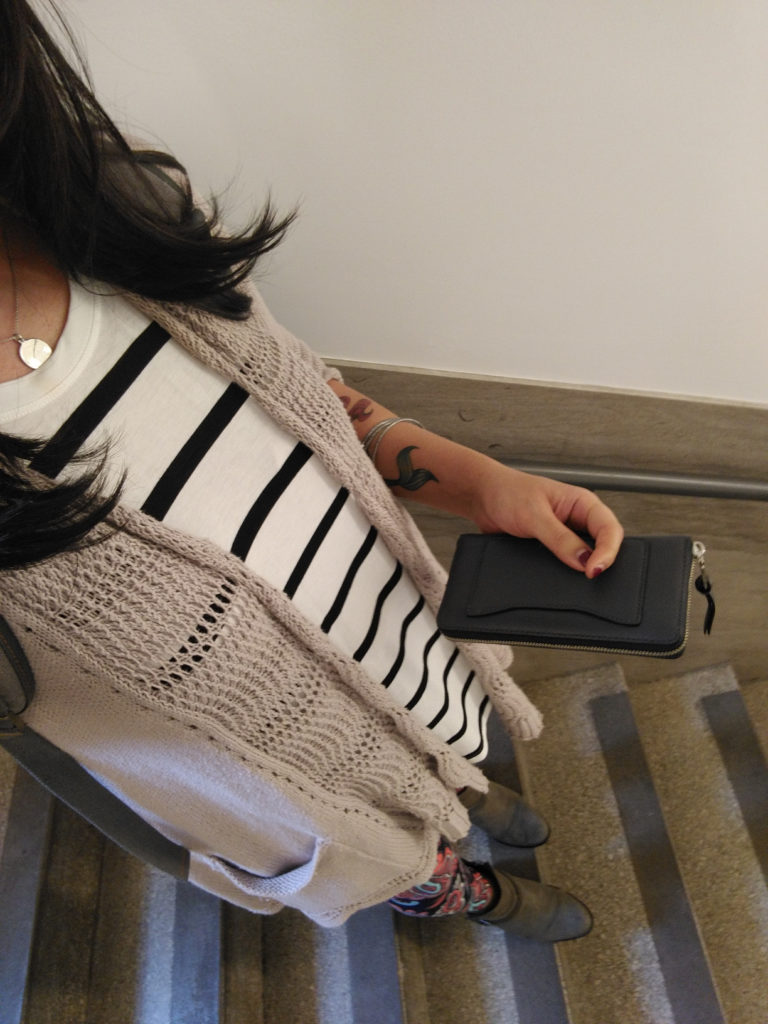 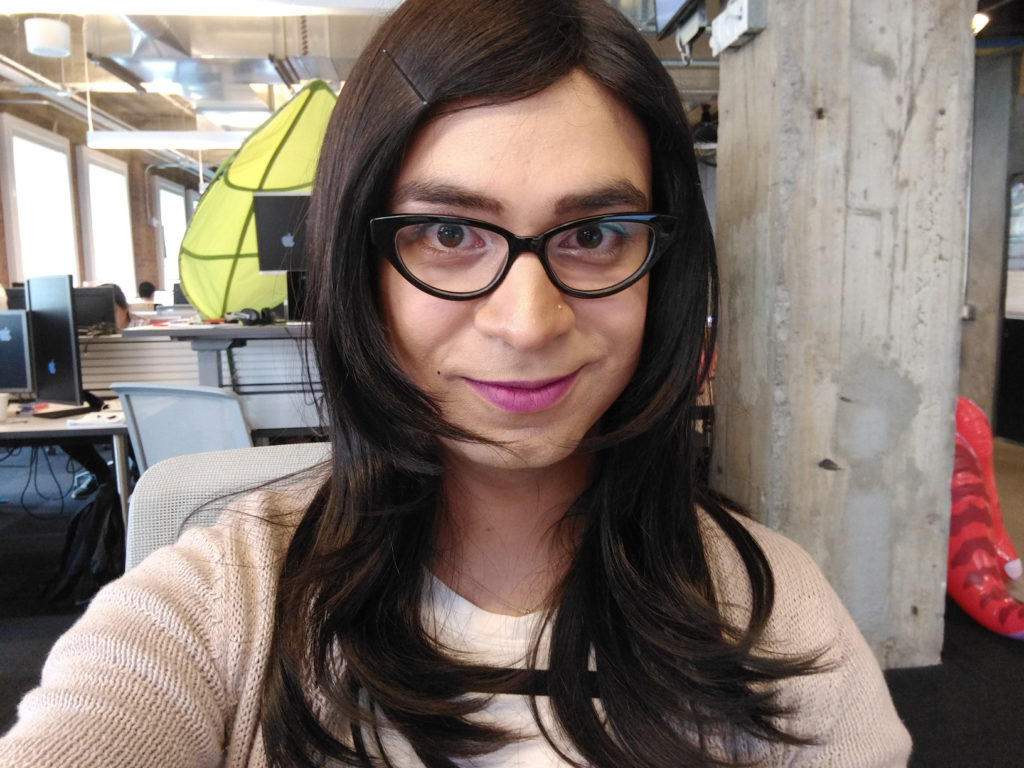 A bit annoyingly was that the day ended up being so busy, that I didn’t really manage to get many great pics in. Oh well, there will of course be other times.

I’m determined, with what little time I have these days, to establish a regular rhythm again of dressing up and expressing that part of me that will not be quieted; the tiny fabulous demon that stamps its surely-stiletto’d feet up and down in my heart and demands to be heard, to be seen, and to exist.

What’s the point of me writing all this down? Sometimes I’m not sure. There’s an element, particularly in this post, of catharsis. Maybe of making a public pledge that I will try harder. Maybe it’s just to show that it’s not all roses – that it’s still a difficult journey, and there’s still bumps in the road and battles to fight, but that ultimately it’s worth it. That maybe anything worth doing is hard-won. And that if I can do it, maybe you can too.

5 thoughts on “Dressing again after a long hiatus”