Home » Crossdressing Articles » The Vain Crossdresser: A Defence of Vanity.

You’re so vain – I bet you think this post is about you, don’t you?

I tend to be an over-analyzer. My teenage years (which I might counter-intuitively deign to leak far into my twenties) were plagued by late-nights in bed trying to sleep, playing conversations with people I’d had that day over and over in my head trying to glean more meaning than was superficially apparent from the words that they actually said, whilst also worrying about whether or not my responses were appropriate, or whether I was able to make myself fully understood. That particular neurosis has largely subsided, but the general theme of worrying and fretting still remains. Add to that the fact that I am a crossdresser (or more importantly the fact that crossdressing is still largely frowned upon by society at large, or at the very least, parts thereof) and you have a recipe for internal meltdown.

One of the things I used to worry about a lot as a crossdresser is if I came off as vain, or even worse, a narcissist. Am I not only a weirdo, but a particularly self-involved one? 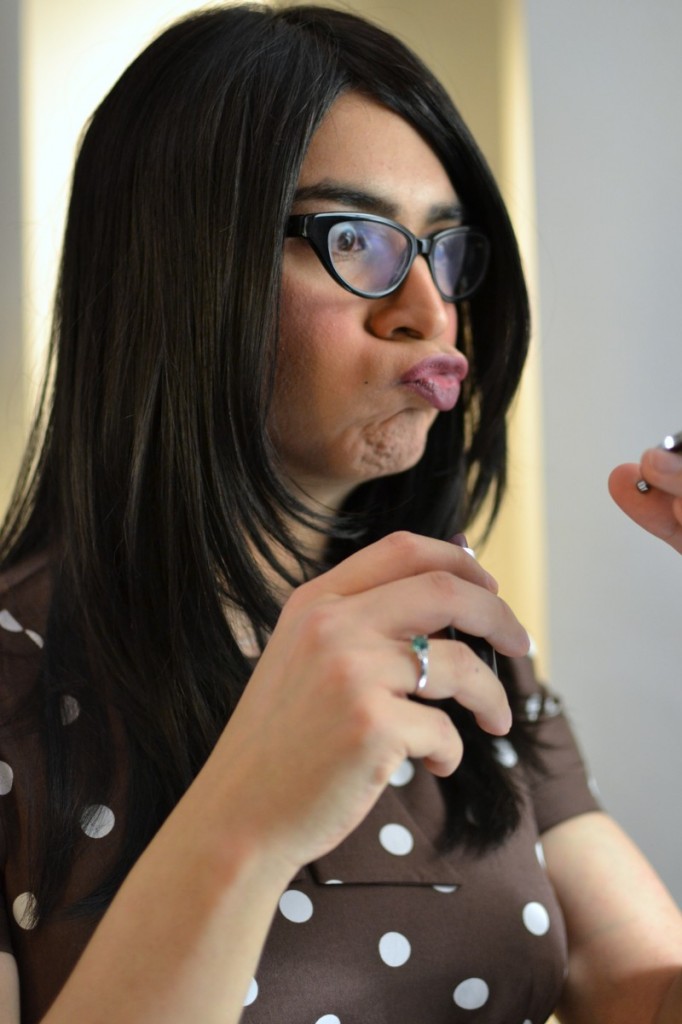 One of the things that feeds into this is photos. A common theme among many crossdressing communities is pictures. We as crossdressers tend to take a lot of photos of ourselves. A LOT. I am, of course, very guilty of this, having gone so far as to book a fancy hotel room for a photoshoot, bought special lighting equipment, and programmed my own picture-taking setup myself, all in the name of getting good photos. That sounds pretty vain, right?

But is it, really?

Somewhat ironically, I can best illustrate this with a photo – one of my favourite photos of myself:

There’s nothing particularly stunning about the photo. My makeup looks pretty good, I like that dress, and my wig is doing all kinds of great things there (SO VAIN). But none of those things are what I love about this photo. What I love about this photo is that I managed to capture a feeling. It’s a feeling that may not be overtly apparent to anyone but myself, but I think describing it will make it more obvious.

It’s that moment I get every time I dress-up. It only happens once, each time. It’s that moment where I’ve put on my makeup already, I’m wearing my outfit, I pull on my wig, I put my glasses on, and I look in the mirror, and I see it – the thing I was trying to find. It’s that short moment where I know I’m happy with how I look as Liz, and that the hard work in getting ready has paid off. It’s knowing that I made it. It’s an iota of fleeting pride before I have to run out of the door (STILL DRESSED, OF COURSE) and get to work, or wherever it is that I felt it appropriate to be dressed at. I take pictures to capture these moments, and I think that might be fairly common, if not stated directly.

As we are sadly aware, crossdressing remains a broadly secretive, not-acceptable thing. Having a cache of photos of ourselves in these happy moments to look through is a great way to, at least in part, satisfy our desire to dress when we are unable. For those of us who are lucky enough to be open about crossdressing, as I have mentioned before on this blog, it can serve as a celebration – sharing our pride of being able to be ourselves.

For those who are not yet ready, not able, or simply not willing to be more open about it, the sharing of photos can incredibly important. They are affirmations of who you are, shared with a small, supportive audience. A collective shouting into the darkness of “I exist!”. 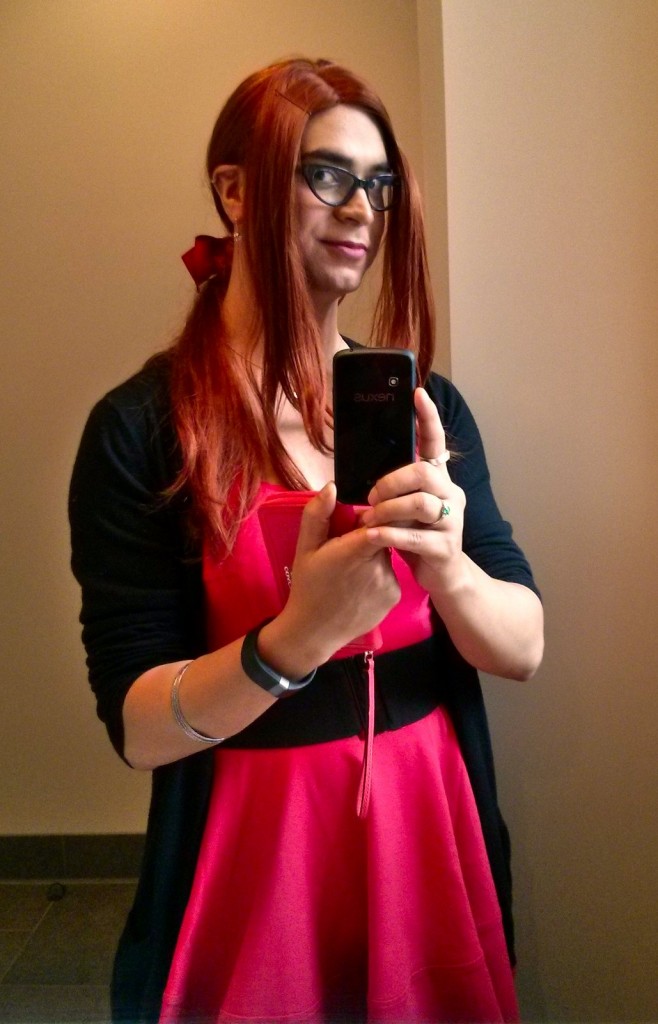 Not only that, our photos are a record – a progress meter with which to gauge how much we have improved over time. As crossdressers, we (generally) didn’t have the luxury of growing with the opportunity to explore the stuff of the other gender. At the age of around 25, makeup was still largely a mystery, and I feel nothing but proud seeing pics from then, and comparing them to more recent ones and seeing how I’ve improved.

A little vanity is normal. Without it, we’d be wandering the streets in sacks, covered in filth. To function in adult society, it’s necessary to take at least some pride in your appearance. When you’re going so far as changing your entire look, such as when you’re dressed, I think it’s only natural to worry more about how you present yourself. When I’m dressed at work, I wake up much earlier than usual to take enough time to get to a point where I’m happy about how I’m going to look that day. And then, throughout the day, I’ll do mirror checks to ensure that my maleness isn’t leaking out from under the makeup. I have to work hard to get to a place where I feel like I’m presentable to the world at large as a woman, and so it makes sense that I would indulge in a bit of vanity to ensure that I remain happy with it. I invariably look presentable as a male – that’s way easy for me, so less vanity required on that front!

Now, this isn’t to say that vanity is wholly good. Like most of our favourite things, one of the seven deadly sins is usually lurking around the corner. I think some reasonable semblance of vanity is absolutely healthy, but I also think that there are limits. At what level does it become a problem, then? My personal view on this is that it vanity becomes an issue when it develops into a solid level of narcissism. As we alllllllll know from our childhood readings of greek legends (anyone?), the word ‘narcissism’ comes from the tale of Narcissus – the boy who fell so in love with his own reflection that he couldn’t bear to leave it, eventually killing himself in the knowledge that he could never have his love for himself reciprocated. I think that’s definitely a pretty clear-cut case of too much vanity, but what about some less extreme examples? 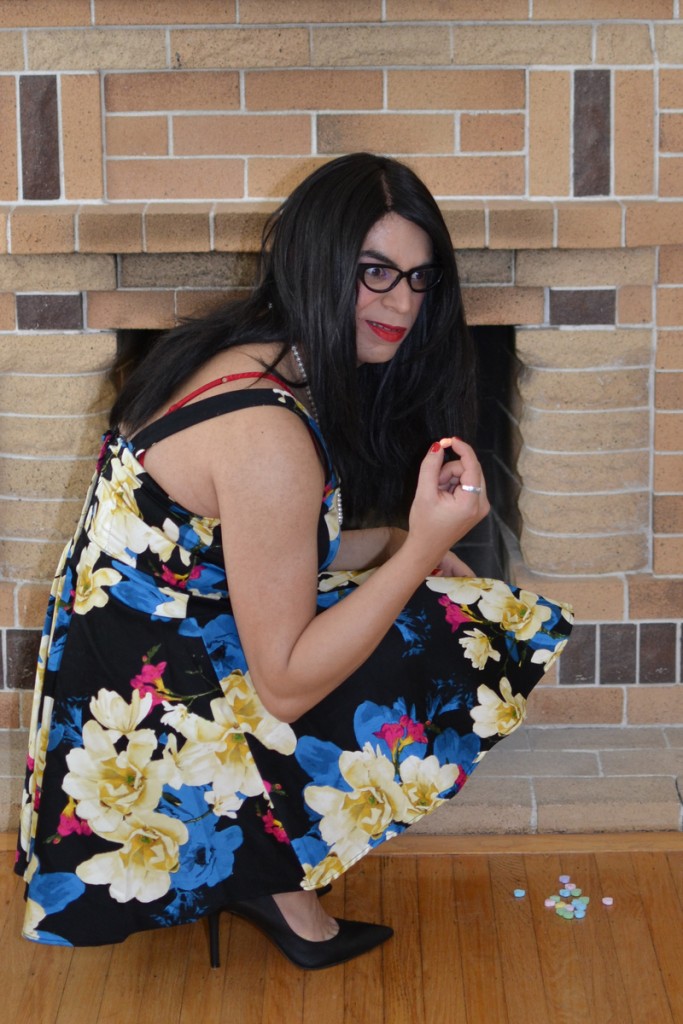 Honestly, I don’t know. I hate to be prescriptive and say “DON’T DO THIS THING”. People have their reasons for doing all sorts of things that other people find infuriating. We all have that Facebook friend whose wall is nothing but selfies. We all know that person who we might think is way into their looks beyond any other interest. Some of us might be that person and not even know it. It would be hypocritical of me to criticise the vain in a post designed to give a more nuanced understanding of why this vanity is necessary.

To the naysayers of the vain: We might not be as vain as you perceive us. Maybe we’re just struggling to accept ourselves. Maybe we’re celebrating the one thing that can make us happy right now. Maybe we need this to find out who we are. Try and understand us a little bit.

To those who would be called vain: Concentrate on being you. Find your happiness, and revel in it. After all, it’s mirror-check time! :D 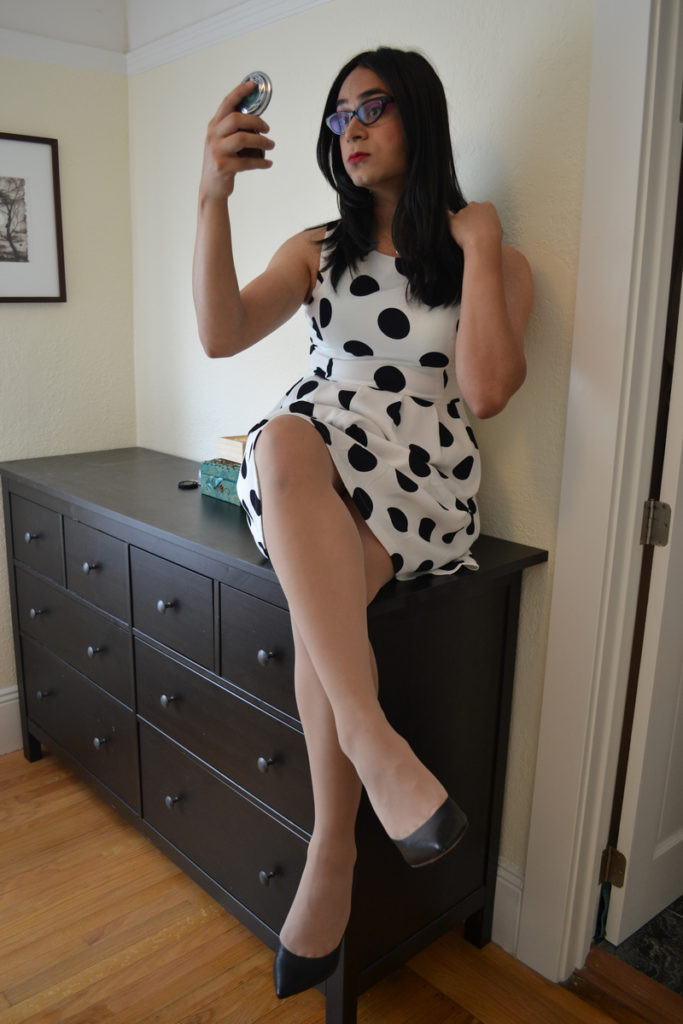 2 thoughts on “The Vain Crossdresser: A Defence of Vanity.”