I read an article not-too-long ago at The Onion, titled Woman Feels Like She’s Finally Ready To Start Receiving Unsolicited Vulgar Messages Again. (If you’re unaware, The Onion is a solid satire site). This particular article, as with all good satire, is both hilarious and extremely pointed – it hit its subject matter squarely on the nose – or went cleanly through it and continued on a path out of the back of its skull, if we insist on sticking to our ‘pointed’ metaphor.

As a male on the internet, I in no way stand out. No one cares what I look like and I am fine with that. But as a woman on the internet, it’s a completely different ball game. And as a crossdresser, a varied community of people who are fetishised by some, it’s just insane. When I first made a Facebook account for myself as Liz, I thought to myself “I know what I’ll do! I’ll join all the communities and accept all the friend requests and talk to anyone who messages me!”

What a mistake that was. A (criminally small) minority of the people were great – we talked about random things – tv shows, books, maybe we would talk makeup or photography or this blog, and they would offer compliments on my style or outfits or makeup (always greatly appreciated!). But for the most part, the conversations seemed to always move towards them telling me that they were horny and asked if I was up for anything. I have always politely declined. In general, they have been happy to accept that, and then move along to, presumably the next person. I’m appreciative at least for the conversation up to that point, but at the inevitable conclusion, everything always feels hollow as it becomes abundantly clear that they were interested in me only for the short few minutes where they imagined a possibility of me helping them got off.

But hey. At least they asked – because the majority of messages I got were much more direct. 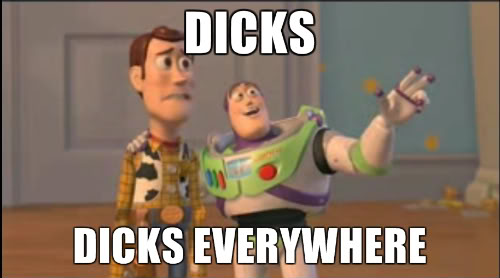 Don’t get me wrong. I’m not opposed to penises. They’re great. You can do all kinds of things with them – you can pee on a wall, which is fun, or write your name in the snow. You can even whirl them around like a sideways helicopter, if you know what you’re doing. In no way am I anti-penis. I just don’t want to see yours, or, know about it at all, really.

Jerry Seinfeld does a bit where he talks about how honking at women is a terrible strategy for getting women, but it’s the best idea men have come up with so far. Part of me thinks that the unsolicited dick-pic is the modern-day equivalent version of that – except now I have to bleach my eyes afterwards. I did not expect, at this or any point in my life, to have seen this many erect (and sometimes not, which is even more baffling) wangs on an unsolicited basis. And they are more varied than I would have anticipated – some are larger than mine, some are smaller, some are confusingly, and obviously, photoshopped to be more complimentary to the owner, and some, bizarrely, I am somewhat certain do not even belong to the sender. It is a sad day indeed when, while trying to woo an uninterested party on the internet, your best plan is to just send a picture of someone else’s dick.

[bctt tweet=”It is a sad day indeed when … your best plan is to just send a picture of someone else’s dick.” url=”https://www.myweekendshoes.com/2016/03/male-attention-or-how-to-make-me-not-like-you/”]

Once, someone just sent me the word “sex”. I ignored that one. A few months later, they expanded on their initial attempt with “sex hot”. I ignored that one too. Another person decided it would be a good idea to send me a bunch of pictures of myself, and then round it off with a picture of their proud cock. I’m no genius, but I think the implied message was “Your pictures made my dick hard”. Thanks, I guess. But know that I, too, am the proud owner of a penis – I’m fully aware of how easy it is to get a boner – it’s a low bar. You’re putting me in the same category of experiences as that one time you had to squeeze past a lamp-post and you got a little bit too close. It’s flattering to know that I drive you as wild as street lighting.

It’s not just dickpics though (although I would like to end my dick-segment with the hash-tag #dontsendmedicks) – just the language people use is extremely off-putting. Telling me you want to “slurp” my toes is weird. I’m a guy too, remember – if you want to slurp men’s toes, slurp your own god damn toes. Some of the most infuriating messages I get are from people who for some reason assume I’m dressed up at that very moment. In all likelihood, I’m not dressed up when you message me. I’m probably at work, or I’m just hanging out with my wife, or I’m on the toilet, or I’m watching Netflix. Case in point:

And it’s not just online. In public while I’ve been dressed up, I’ve had a creepy guy follow me off a train, wolf-whistles, or even people I work with who, when seeing me dressed up, gave me the full up-and-down. Eesh.

I’m probably preaching to the choir with all of this, anyway – if you’re reading this, I feel like you’re probably not the kind of uneducated troglodyte who sends pictures of your, or possibly someone else’s, genitalia to people on the internet in the vain hope of ingratiating yourself to them. But just in case, here are a few tips to help you communicate with crossdressers, or anyone, your might find online.