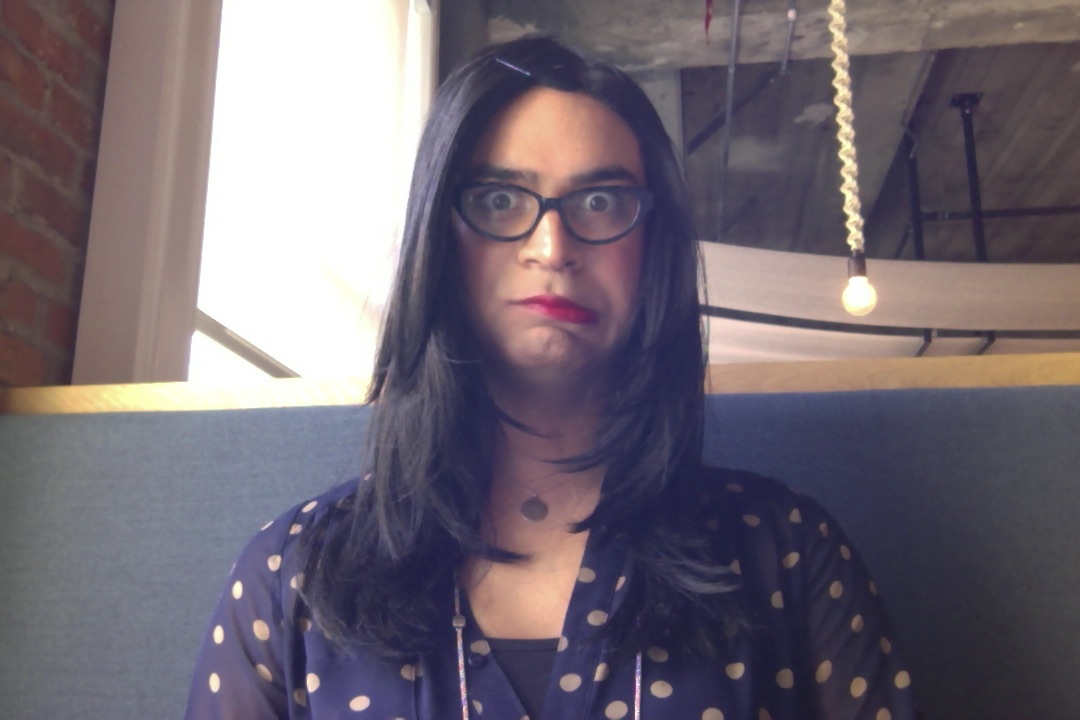 Home » Being Out » A harassment story.

As I sometimes do, I dress up to work. It’s not a big deal. This day didn’t start off any different than most others. I set my alarm half an hour earlier than usual to make sure I had enough time to get ready. The night before I’d pre-trimmed body hair down so that shaving in the morning would be quicker. I was opting for a jeans + tunic look, and was going to experiment with a lighter make-up look (and let me tell you, those few minutes saved by not having to shave my legs or do my eye-liner VERY CAREFULLY really came in handy when I was trying to figure out what shoes to wear).

So yeah. A day like any other. I didn’t look particularly different than I usually do when I dress up, apart from the fact I was wearing jeans (my usual outfits involve dresses, I suppose). Nothing particularly out of the ordinary. Disregard the derp-face. A few hours before this was taken, I really, *really* was not happy.

So. Dressed up. Thought I looked pretty good, despite the mini-hangover I managed to get from the night before while hanging out with friends. I stepped out my front door, and did the usual walk to the train station.

I still remember how difficult it used to be to do this. It’s a lot easier now, but I still get that odd twinge in my gut. People look, and honestly, that’s fine. I know I’m an anomaly. I can deal with that, and I can deal with them. Just stare back, and they usually avert their eyes, realizing that they are invading your privacy – it’s almost routine now.

So I get to the train station. It’s a little busier than usual. I remember thinking that now I’d have to walk past all these people lining the platform, looking in my direction – simply because they’re looking down the platform. I walk all the day down the line to my usual spot. No big deal. There’s a small line of maybe four or five people ahead of me, waiting at one of the spots where the train doors open – the one I usually wait at, creature of habit and all that. We stand there, biding our time until the train arrives. I think I’ve got it timed pretty well that by the time I get to my spot on the platform, there’s only a two or three minute wait.

A dude in the line sees me. He smiles.

The train arrives, and we all file on.

I spot a couple of empty seats. I take one. The seat next to me is empty. Just how I like it. I scan around the car a bit. Smiling dude is sitting a few seats in front of me. He sees me again, and smiles. I smile back. Seems like the polite thing to do.

Clearly, this was my first mistake.

He gets up from the seat he had, walks over to the empty seat next to me, sits down, and introduces himself.

This is a new experience. And I’m basically terrified.

When I’m out and about when dressed, I don’t want people to notice me, let alone enthusiastically try to get into my world. I don’t know who this guy is, but he *came over* to talk to me. And let’s be honest here – he can see right through me – I know I’m not *that* good.

So he’s introduced himself. I smile, and try to read my book, kind of scared. It seems ridiculous now, but it was really jarring at the time. I’m sweating, which is annoying because I thought my makeup looked pretty good. I pull out my matte-ifying powder compact and do my best to mop up.

Nothing really happened for a good thirty minutes. I knew he was looking over at me every so often, in between checking his phone and highlighting whatever important lines happened to be in the papers he was carrying. In my furtive glances, I could tell he was wearing a wedding band. He’d been checking his email on his phone a little bit too, as you do, except that towards the end of the journey, he was checking his phone a little more aggressively. His elbow was rubbing up against mine. This was beginning to get invasive, and I felt my heart rate go up even more, but at least I know I’m getting off in a minute or so. I withdrew my elbow, but he persisted.

The train approaches my station. His elbow recedes. He’s getting off too! He stands up, and walks to the left. I stand up and walk to the right. I step out of the train and walk toward the exit. I’m free – but I don’t feel relieved just yet.

And then I see a shadow to my left.

I don’t hear what he says – some innocuous comment about the day or something, but I’m suitably disturbed. He’s followed me off the train. I keep walking.

“I’m not interested.” I say. It was surprisingly difficult to get the words out, for reasons I can’t quite explain. I felt like I shouldn’t feel so scared, shouldn’t have felt so….gross, like I’d invited this. I didn’t do anything!

Looking down at the ground I shake my head. It feels meek and timid. I can’t get any words out – managing to say that I wasn’t interested felt like a force of will, and that seemed exhausted at this point. I keep walking, slightly faster. I check my peripheral vision for shadows. I get to the stairs. I walk up. I get to the top and turn around, to see if he’s still following me, but I don’t see anything. I go out of the station, and now I’m on the street. I get to the intersection, and wait impatiently for the lights to turn. I’m checking the reflections in buildings around me to see if he’s there. I keep walking. I text my friends to see if they’re at work yet. I get one block from work and I feel brave enough, while waiting for the lights to change, to turn around and take a good look around all the intersecting streets to see if he’s followed me at a distance. I don’t see him.

I walk into my building, where I see a friend, and I tell her what happened. My glasses are fogging up because of how overheated I am, and the cool morning air isn’t cooling me down anymore. I get up to my desk, unload all my stuff, and then go to the bathroom and just…sit there for ten minutes, trying to compose myself.

Because, honestly, I don’t know. I’ve never seen this guy before, I’m pretty sure. But apparently he gets on at the same station I do, at my spot on the platform, and hopefully only by some stroke of coincidence, at around the same time I do. And it makes me wonder, had he seen me before? Had he watched me go there, hoping for his chance to speak to me? Or was it all just a giant cosmic coincidence?

There’s so much about this whole thing that bothers me:

I don’t know. On the one hand, I feel like maybe I’m over-reacting. Like I shouldn’t feel this way, because, really, what did he do? Try to get to know me? Was I justified in feeling so…icky? So fearful? But am I over-reacting? I talked to female friends about it all day and they told me their stories of abuse and harassment and unwanted attention, and each of them were equally invasive and scary, if not more-so.

This is the first time I’ve had a negative experience (ok, maybe that’s not entirely true).
I always felt like I would be able to handle it. Hell, this isn’t even an extreme case.

Read more about my experiences Being Out.

19 thoughts on “A harassment story.”