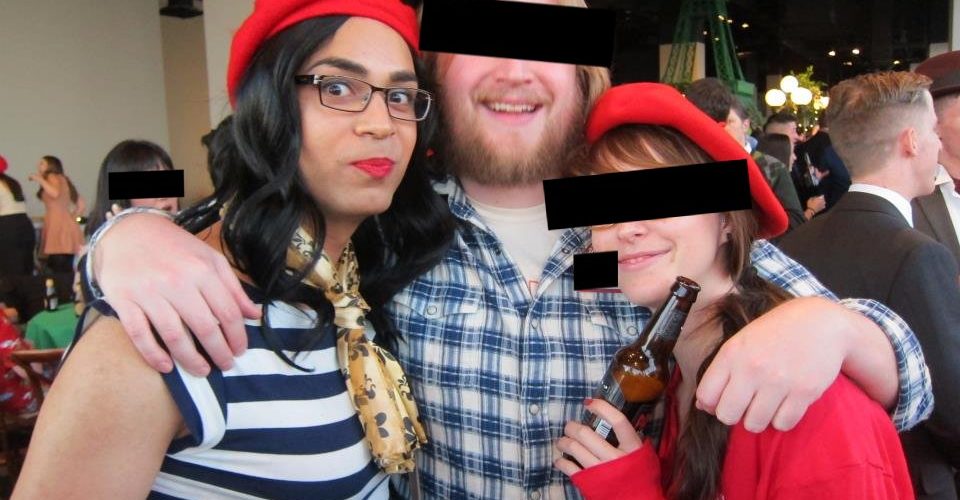 So, my job’s kind of cool inasmuch as they have lots of somewhat large parties where people dress up (You’ve probably noticed).

Ever since the first one I dressed up at (which was scary, but a necessary step in my eventual coming out of the CD closet and having people see this as a NORMAL, NON-PERVERTED HUMAN ACTIVITY), it’s become somewhat expected that at each costume party type affair, I’ll be dressed up like a lady. And that’s fine. I’m happy to fill that role :D

So, the theme of the Christmas party was “France”… Little bit of a broad theme, but whatever. I spent a little while trying to figure out wtf to do, and then just settled on some pretty classic French tropes – Stripes, beret, Fleur de Lis. As always, protecting the identities of the innocent :D Ooh. Eiffel Tower and bad lighting! I SHALL LOOK MAGNIFICENT! :/

Notes on the outfit:
Dress was French Connection (which fit in quite well with the theme, lol), purchased from Amazon.

Scarf, also from Amazon, as was the beret.

Shoes were from Payless (and insanely comfortable, actually).

Oh, and the bag I got from Threadflip, which is totally worth checking out.