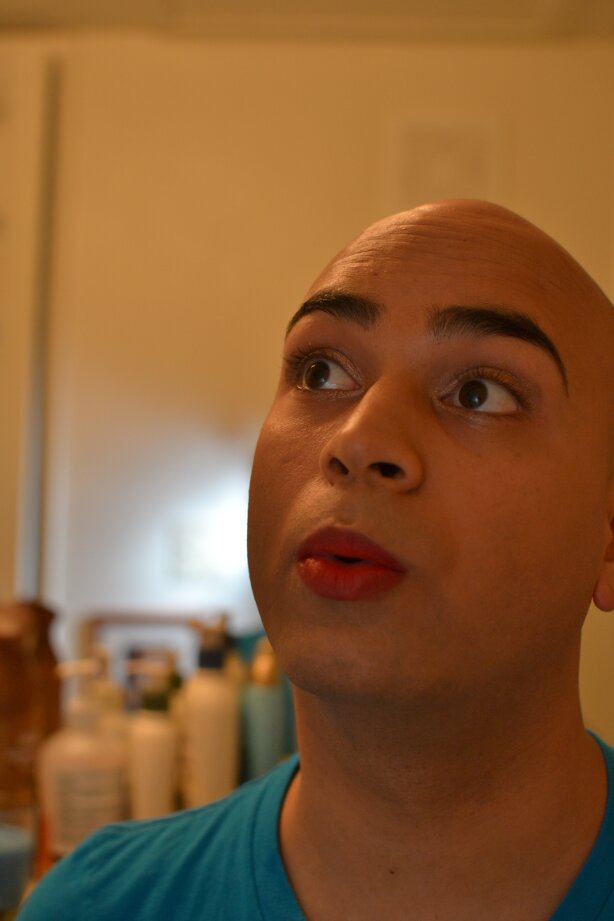 Carrying on from Part Two, in the Making Liz series…

You know those hairy things above your eyeballs? Yeah, they need work too.

This was a revelation when I found out: Eyebrows really make a face. Clearly, before I got mine waxed, and figured out how to maintain them properly (which, really, I still haven’t figured out, but I’m getting there. ish.) I looked like a whorish llama. This stuff is pretty amazing: Laura Mercier eyebrow pencil, in brunette. I read once that you should avoid going TOO dark on your eyebrows. Definitely true. The first time I tried this, I was drunk, and it looked like I’d killed a panda and cut out strips of its fur as face-ornaments. Definitely requires a gentle touch. And for the love of god, buy a pencil sharpener for makeup pencils. You ever tried sharpening an eyeliner pencil with a swiss army knife? DOES NOT WORK. Pretty sure this is a “Before” picture… This is definitely an “After” picture. Note the tapered ends. The thing with eyebrow pencils, and I guess makeup in general, is that it’s all about definition. I haven’t drawn in anything crazy here, I’ve just made them stand out a little more than they otherwise would have. Anyway, sticking with eyes for the moment… Sweet jesus, the Naked Palette. This thing is amazing. I tend to avoid the darker hues, mostly because I tried once and ended up looking like…well… like I was fifteen again, so I’ll just stick to everything else on this palette, which is juuuuuust fine. Oh god. We’re moving onto lips. This is my least favourite area, because I have no idea wtf I’m doing. I know (or I think I know) the theory, but I just have not in any way, even slightly, figured out lip-makeup. But whatever. Here’s some revlon lip-liner. So carefully go around the outside of your lips and make an outline that looks vaguely like lips. Something like that, I guess. I’m told that lip-liner is there for two reasons: To help define the shape of your lips (or the lips you aspire to) and to stop your lipstick from bleeding. iunno. All I know is, I suck at it. Also, I really don’t like this lip pencil. I need to just throw it in the bin and run off to Mac or something to get something decent. This is how seriously I take my lipstick application process, which is to say, actually quite seriously, but I’m so bad at it, I pretend it’s all fun and games. Derp. This is that Make Up Forever lipstick I used earlier.  I used to reeeally like it, but I think it was a bad choice for this demo. That’s a bit better, I guess… Still a bit on the red side though, right?

In general I would say, if you don’t want to draw attention to your manly-beard-face, go with a darker lip-colour. This BRIGHT RED was clearly a mistake.