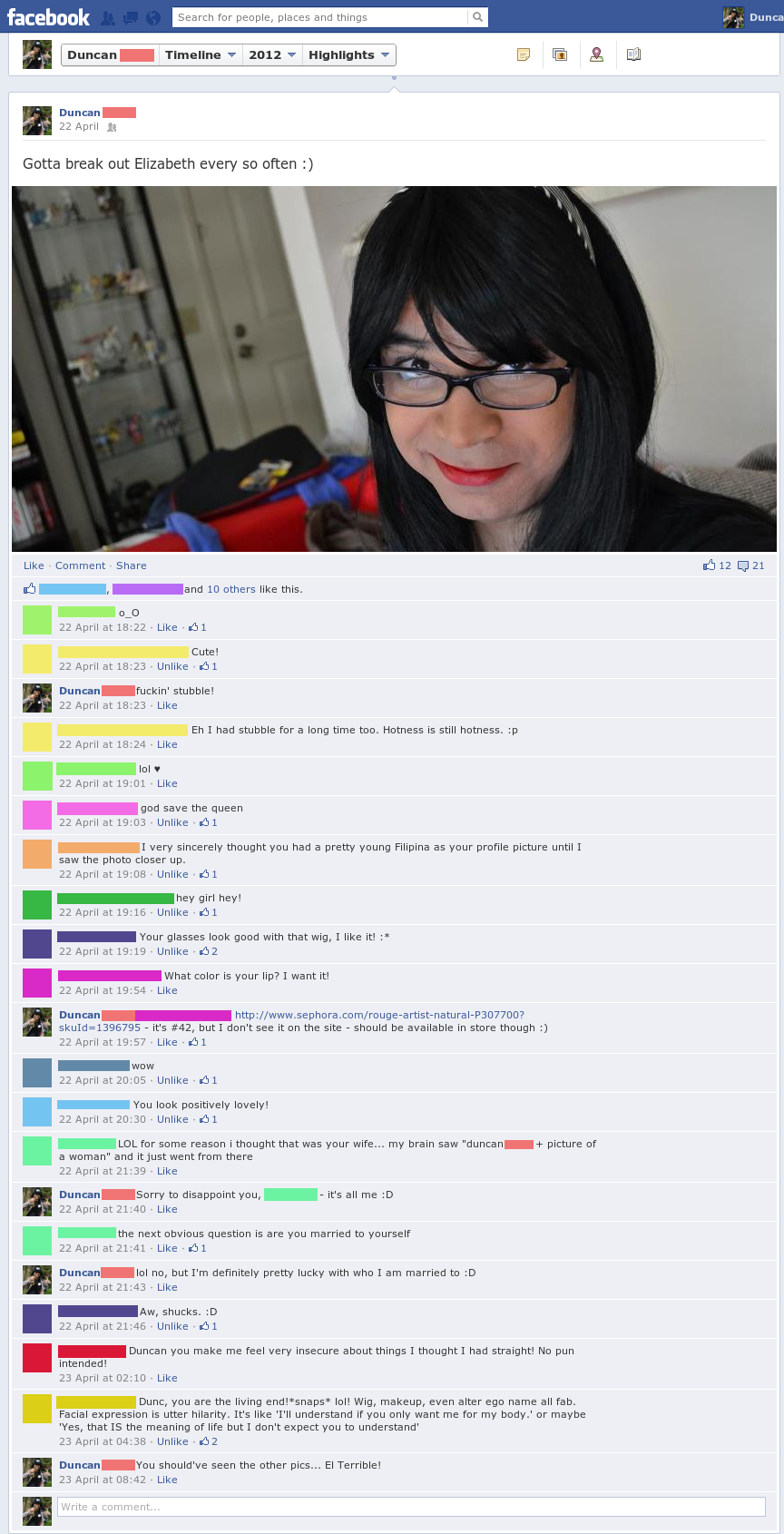 So, a funny thing happened a while ago… When I posted this entry back in April, one of those photos struck me as one of my favourite pics of myself.

It was this one: I think it’s still probably my favourite (not that I don’t try to top it each and every time I take pics!). But while I was sitting in front of my laptop (updating this blog) I began to feel a lot of different things. Things I’d felt before, but never as strongly as I did just then.

This is stupid. This is an AWESOME picture of me. Why can’t I show people?

There really wasn’t a good answer. Why couldn’t I show people? I had a sudden, somewhat dangerous, urge to just post it on facebook, and let the consequences be damned.

I talked a bit to my wife about it, and she was supportive (as she always has been – she views it very much as a “So what? Who cares what clothes you want to wear – you’re not hurting anyone!” – which, I’m pretty sure, is what we, and all reasonable people, are probably thinking). So. Big breath. Upload the picture. Come clean. See what happens.

And the reactions… Well. I posted a very quick followup “Feel free to ask me any questions” post, if people were curious, and what I got was probably the best reaction I could’ve gotten. To be honest, I was expecting at least a little bit of fallout coming out as a crossdresser, but there’s been nothing even remotely substantial in that sense – and it’s been almost 4 months. Granted, I’ve been leaking bits of information about it here and there, and people have seen me dressed up as a woman a little bit too well at costume-parties, so I doubt this was a complete surprise to most. Still though, ever since I so publicly revealed all of this, when I add pics on here, I end up adding a couple to my facebook folder of pics of me dressed up.

It’s been… good. Liberating, for sure – I’ve been given (really, I gave myself) the freedom to be who I want – I’m not hiding anything now. This is who I am. This is what I do, and, as it turns out, no one really gives a shit (but in that good, non-judgemental, way). I have much more latitude to experiment. A lot of people who commented there were actually people I work with, and as such, I’ve been going to work with some understated makeup, dangly earrings, and painted nails pretty much every day. I’ve had open and honest conversations about it with people. I don’t think there’s been a single downside.

That’s not to say I don’t have anywhere else to go, because I’m hardly going out every day fully dressed – that’s still a scary prospect – but at least it’s not a secret. At least I’m not hiding something because I think it’s shameful.